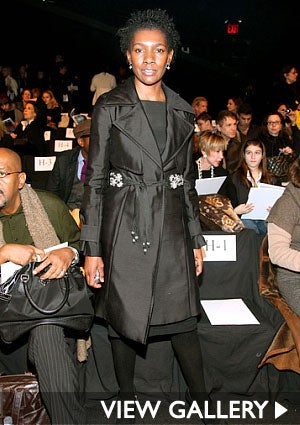 EBay Style Director Constance White has been living and breathing fashion since her days as a young reporter for Women’s Wear Daily. White’s preoccupation with fashion and her genuine love for educating women on ways to look their stylish best has made her one of the industry’s leading experts. White has worked in fashion journalism for 15 years, contributing to a number of impressive publications such as The New York Times, ESSENCE and British Vogue. White was also one of the founding fashion editors for Tina Brown’s defunct Talk, and the first and only Black woman executive fashion editor at Elle (or at any of the fashion glossies). She has also made frequent appearances on “Oprah” and “Project Runway,” and hosted Metro’s “Full Frontal Fashion.” In her book “Style Noir,” White explores trends set by Black women and influential Black designers, as well as offering advice on everything from the core pieces that women should own, the importance of a great cut and quality fabric, and ways to incorporate African touches into one’s ensemble. While the book cover could have featured one of the many fashion trendsetters she covers–like Diana Ross, Tina Turner, Naomi Campbell or Erykah Badu–it is White herself who graces the cover. The embodiment of style noir, one look at a beautiful White sporting a black leather blazer, black turtleneck and a bold necklace, it is evident that this woman definitely practices what she preaches.   White has been on our fashion radar for some time now, and as the years have gone by, she’s continued to dress the part. Despite her noir ensemble on the book cover, White is a huge fan of color and prints. Her enviable closet boasts a rainbow of dresses, trenches and tops. “Black people are glamorous. We love color!” She’s been spotted in a lavender draped gown with a white fur chubby and a gold trench with a long flower print skirt. While White, whose personal style icons include Diana Ross, Rita Marley, Tina Chow and Nina Simone, may be one of the industry’s power players, we admire her reluctance to being a slave to fashion. Indeed, the sign of a true independent spirit whose style is worth celebrating.   Check out Constance White’s knockout looks… Read more: