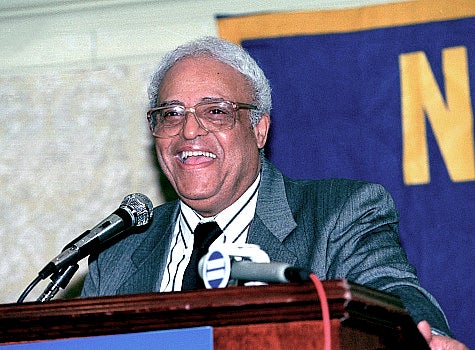 Civil rights leader Benjamin Hooks, who led the NAACP from 1977 to 1992, has died, said the vice president for communication at the NAACP. He was 85. No word on the cause of his death.   “He’s had an amazing career,” said Julian Bond, a former head of the Atlanta branch of the NAACP. “Judge, FCC commissioner, minister of churches in two different cities at the same time, businessman, head of the NAACP. Most people do one or two things in their lifetimes. He’s done an awful lot.” The passionate activist grew up in the segregated South, in Memphis, Tennessee, in 1925. Still, he went on to serve in the United States Army during World War II and was also a lawyer. Hooks, an inspirational leader founded the Southern Christian Leadership Conference, which has him as one of its board members. He was the first Black to be named to the five-member Federal Communications Commission. The ambitious man also owned several fried chicken franchises in Memphis years ago. In November 2007, former President George W. Bush awarded him the Presidential Medal of Freedom, the nation’s highest civilian honor. Hooks worked with colleagues to start a program in which more than 200 corporations agreed to join in economic development projects in Black communities, according to the NAACP. He is survived by his wife, Frances, and a daughter, Patricia Gray. Read more: