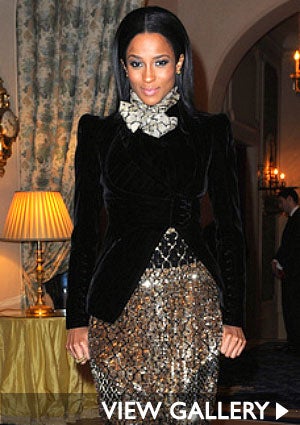 As if Ciara’s day job as R&B songstress and technically skilled dancer wasn’t fabulous enough, the 24-year-old has been making moves in the fashion world these past few years. The statuesque beauty inked a multi-million dollar modeling contract with Wilhelmina modeling agency, has been popping up in editorial spreads around the world and now she can add muse to her ever-growing fashion resume. The renowned French design house’s creative director, Riccardo Tisci has named Ciara his new muse and at the recent couture Spring 2010 shows in Paris she was spotted celebrating her new coveted side gig. She was front row at the Givenchy show seated next to Kanye and Amber, visited the label’s boutique for some shopping and attended a private cocktail soiree thrown in her honor by Tisci.  Aside from pissing off some at the Givenchy show who booed her for showing up a whopping forty minutes late for the show, which was held up until she arrived, it’s safe to say that the Couture Spring 2010 was undoubtedly Ciara’s big fashion moment.   Following in the steps of actress Audrey Hepburn, who served as the label’s founder Hubert de Givenchy’s muse in the 50’s and 60’s, Ciara will be a source inspiration for one of fashion’s most talented contemporary designers today. Tisci is celebrated for his ability to design romantic clothes that are dark, strong and atmospheric instead of delicate and pretty.  Although, Ciara has developed and matured over the years, one thing remains is her affinity for strong looks. It’s no surprise she’s been a fan of Tisci for some time. Judging from how sophisticated Ciara looked decked in Givenchy at the shows in Paris, we think this is a match made in fashion heaven.