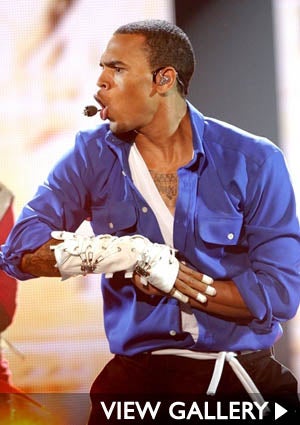 Chris Brown was denied a place in the BET Awards’ Michael Jackson tribute last year — presumably because of the incident with Rihanna only a few months earlier — but he took the stage tonight to honor the one-year anniversary of his idol’s death. What happened next was so much more than a slick dance routine…
MJ’s brother Jermaine introduced Brown — not by name, but instead screamed “Here he is!” — and C Breezy burst into “The Way You Make Me Feel” the way only he can — with spot-on choreography and next-generation Jackson swagger. He lip-synched through the moves, wearing the MJ arm brace, the white bandages on his fingertips, the white socks and signature penny loafers. Squint your eyes and you’d think Michael was resurrected. Next up, Brown threw on a fedora, black sequined blazer and the glitter glove and paid respect to “Billie Jean,” vibing to that thick Quincy Jones bass line. When the tune changed to “Man in the Mirror,” Brown took center stage and grabbed a live microphone to sing before a photo montage of the legend on the screens behind him. It didn’t work. He started, “Gonna make a change… for once in my life, gonna feel real good…” He went silent and visibly started to cry, popping back in with a phrase to the song before going quiet again. The lyrics touched too close to home, and he paced back and forth across the stage as the music played, struggling to mouth the lyrics as tears flooded from his eyes, and he cried the ugly cry. His voice cracked, and he fell to the stage overwhelmed. A year and a half since his incident with Rihanna, maybe it was all too much for the 21-year-old. Brown has also experienced enormous challenges with his music career due to public perception since the drama. This Michael Jackson tribute seemed to be a turning point for the talented singer and dancer. Either way, it was great to see C. Brown do what he does best and showing some human nature at the same time.
Watch the video below. What did you think of Chris Brown’s emotional performance? Later in the night, Chris Brown won the BET Fandemoniom Award for fan favorite and told the audience, “I let y’all down once, I won’t ever do it again.”