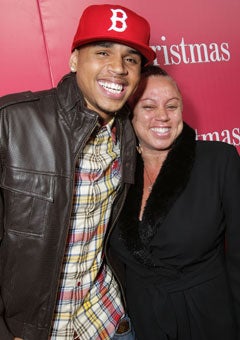 Chris Brown hasn’t had an easy past couple of years and his mother, Joyce Hawkins, recognizes her son’s struggle. The usually tight lipped Hawkins opened up to Sister 2 Sister magazine to discuss her son’s behavior and rocky past. She’s urging Chris to “own it, deal with it and move on with his life…”

“I think he really needs to talk about the situation in itself, what actually happened to Rihanna… so that he can get that out for himself… He has to learn to deal with it and go on with his life,” Hawkins tells Jamie of Sister 2 Sister. “This is something that happened, it was a huge mistake… But he is still a human being and we all make mistakes and we live and go on with it.”

She’s giving sound advice to her troubled son but Chris hasn’t exactly learned to deal with the constant negative probing given his “Good Morning America” outburst.

However, this past Thursday, Chris turned 22 and announced a birthday resolution that had fans talking. Via Twitter the star said, “My birthday resolution is to respect and love people more. Maturity is a task sometimes for me but my love is the same.”

He’s not far off the path of success, but just needs a little guidance as every young man does.

What’s the best advice a mother could ever give her child?