With a hit reality show on Bravo, a new restaurant and wine-making ventures on the horizon, there’s no doubt Chef Roblé has been busy in and out of the kitchen. And now, Roblé is bringing his taste to the beauty world as he preps to launch Clique, a new fragrance for women. Essence.com sat down with Roblé to discuss what he finds sexy in a woman, beauty products we should all be using—and of course, his new scent with perfumer Firmenich.

Essence: So, where did you get the idea of creating a fragrance for women?
Roblé:  Well, it wasn’t my idea.  Bart Schmidt [a branding agent at Firmenich] approached me with the idea a few times. When I first walk into the Firmench offices, I saw Vera Wang and Modern Muse bottles and I thought to myself, wow, these are all fancy fragrances. That’s when I knew these guys were legit, so I should feel special about being here. From there, we went into their labs, which is their kitchen, and they started letting me smell things. Eighty percent of tasting is smelling.  I am good at identifying and mixing different tastes—I’ve been cooking since I was a kid. Creating a fragrance and cooking require similar skills.

Essence:There’s no doubt you have impeccable taste and a great sense of smell, how did that help you create a fragrance?
Roblé: Frank Voelkla master perfumer] who’s the third guy involved in this project, asked me to give him some of my favorite recipes to transform them into notes that could be used in the fragrance. I gave him French Toast Crunch, which is basically sweet and slightly savory, french toast.

Essence: That’s mouthwatering for a buttery, sweet scent. What’s the other note?
Roblé: Second ingredient is a cocktail on the menu at a NYC restaurant and nightclub Avenue, called “The Chupacabras.” It’s a blood orange margarita with a hint of chipotle. The citrusy scent is what you smell when you first spray Clique onto your skin. Once it settles, the buttery oriental—French Toast Crunch—emerges.

Essence: What is the inspiration for Clique?
Roblé: It’s a woman and her girls—The Clique.  They’re all getting ready to go out to dinner at Beauty and Essex [a restaurant bar on NYC’s Lower East Side], ‘cause it’s girl’s night and maybe they go to the club afterwards. The fragrance is a mix of what they call gourmand and oriental with a hit of floral to it. I like a little bit a floral but I don’t like a woman running around smelling like a bouquet of roses. 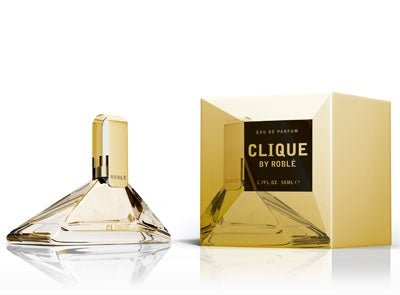 Essence: Since Valentine’s Day is coming up, is there a lovely fragrance you like on a woman?
Roblé: Two of my ex-girlfriends wore Armani Code.

Essence:  Since you’re venturing into beauty land with Clique, we’re curious: What’s on your bathroom vanity right now?
Roblé:  I like Carol’s Daughter Monoi Shampoo and Conditioner, and the Manoi mask every once in a while. I also use their hair milk every day. I take a shower, and I throw some Monoi Hair Milk on and I’m out the door. Dry hair is not a good look. Either cut it all off or take care of it. I wash my face with Burt’s Bees Orange Essence Cleanser.

Essence: Great, anything else you’d like to add?
Roblé: I want people to want to bite you when you’re wearing this fragrance…