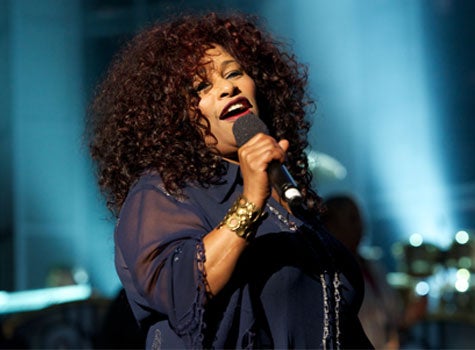 Her hair alone is legendary. Her voice is unforgettable and her style is iconic. Chaka Khan’s musical contributions span four decades, and she isn’t done yet. But she doesn’t mind lending her studded stilettos to one very famous fan.

“Glee’s” Amber Riley channels her inner Chaka Khan in the March issue of Essence and she nails it. Though you would expect high drama, and maybe even a little diva-tude, Chaka Khan will surprise you. Besides being besties with Snoop Dogg, the icon is shockingly down to earth and unapologetically honest.

Essence.com sat down with the ESSENCE Music Festival performer (got tIckets yet?) for a straight no chaser chat about her son’s murder trial, spirituality and of course her biggest fan, Amber Riley.

ESSENCE.com: You’ve probably seen the Amber Riley as Chaka Khan “Glee” campaign. What do you think about it?
CHAKA KHAN: I’m honored. I think she looks great. That looks like something I’d wear. She probably got that made. You can’t be buying stuff off the rack. I don’t see a lot of my stuff off the rack. [laughs]

ESSENCE.com: What do you think of the show? Are you a “gleek”?
KHAN: I think “Glee” is probably one of the better programs. I don’t get to see a lot of TV, but I did catch Glee in Japan go figure. It’s really hot out there. Amber is a sweetheart. She reminds of my granddaughter that just went away to college. They both have the same kind of spirit. They both speak their minds and they are both very talented.

ESSENCE.com: You have had a plethora of experiences in this business. What is your advice to Amber Riley?
KHAN: In her success, she’s going to find some false friends and some true enemies. That’s a quote from Mother Teresa. Stay focused and stay in the present time, and give it to God. If it’s to big for her give it to him. And she can always talk to me. I didn’t have anyone to talk to when I was coming up to give me advice so I’m there. But she doesn’t need my advice. She reminds me of a locomotive. She better go’on! I want her to keep her heart open. Don’t be afraid of being hurt because they can’t really hurt you.

ESSENCE.com: We hear that a biopic may be in the works. Is that true?
KHAN: If I was to do a film I would have my daughter portray me. Why not? Like me she can sing. That’s kind of a no brainer. She can definitely play a stage in my life. We have a couple of scripts we are working on. Right now people aren’t as able to — a lot of my friends are not working. It’s really sad. But we just signed a couple of partnerships with some really big companies. So we are just working out a plan to execute.

ESSENCE.com: After going through so much fire in your life, how do you laugh so much?
KHAN: You’re either going to laugh all the time or you’re going to cry. You have to pick which one you’re going to do. You have to not take yourself so seriously because a meteorite could come down and end all this in the next two seconds. You dig? So you have to live in present time and not be tripping on the past. You can’t live the past and the present at the same time. That’s my main message is to stay in present time and move on. Don’t take on what you can’t take on. Give it to God!