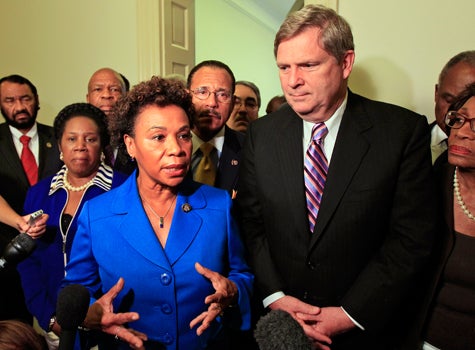 What a strange week it’s been in Washington, D.C. After knee-jerk reactions to a tape that conservative blogger Andrew Breitbart published of former USDA official Shirley Sherrod — selectively edited to make it look like she’d discriminated against a White farmer — the Georgia woman found herself immediately out of a job and with her integrity questioned. But while the Obama administration and the NAACP acted hastily in condemning Sherrod, the Congressional Black Caucus watched the case unfold with skepticism. After Agriculture Secretary Tom Vilsack offered Sherrod a public apology and a new job on Wednesday, the CBC wrapped up the whirlwind day with a private meeting with the Secretary.   ESSENCE.COM sat down with CBC Chair Barbara Lee to discuss the confab with Secretary Vilsack, why the Caucus thinks we need a national dialogue on race — and how the Tea Party isn’t helping matters. ESSENCE.COM: What was the tone in your meeting with Secretary Vilsack? CONGRESSWOMAN BARBARA LEE: It was serious and focused. In many ways, it was painful. Clearly he knows that he made a huge mistake, and he was very humble in his apology. We also talked about some of the historic institutional problems with the USDA as it relates to Black farmers, and what he’s doing to try to weed out those problems. We wanted to figure out how to use this moment, and turn it into one where we can understand how the Department of Agriculture has not been as responsible to African-Americans as it should have been in the past. ESSENCE.COM: What was the Secretary able to tell you about finishing the job on this Black farmers settlement? LEE: The House voted on it, but it’s up to the Senate. We’re pushing the Senate to live up to their promises to the Black farmers and act. The ball is in their court. Secretary Vilsack does support it, and the President supports it. The Black farmers deserve their settlement, and we’re going to keep fighting. But what has taken place puts it on the front page again, so hopefully with the attention now the Senate will see that this is a big deal. ESSENCE.COM: When you first heard about Andrew Breitbart’s video clip of Shirley Sherrod, what was your response? LEE: I know something was wrong with that tape. I didn’t know what it was, but I knew something was wrong. I know what type of media he engages in and what his whole mission is, and that is to take the Obama administration out. When we started looking into it, all of my suspicions were confirmed.   ESSENCE.COM: In contrast, what do you think about how the Obama administration reacted? Many people believe that by forcing Mrs. Sherrod’s resignation, they catered to fears about Black people that Breitbart tried to advance. LEE: I don’t know; you’d have to ask them about that. I think the big problem was that they acted too hastily. They didn’t wait like we did, didn’t do their due diligence, and reacted to an unfortunate right-wing attack on a great woman. But the Secretary apologized. He was forthright in his apology, and he saw that he was wrong. ESSENCE.COM: In a CBC statement this week, you called for a national dialogue on race. What exactly would this look like — a White House forum of some sort? LEE: The form that it takes we have to still figure out, but I think we need to have people around the country call for a dialogue on race and what this really means in terms of the unfinished business in America. When you look at the inequalities in our society around economics, educational achievement, health, criminal justice and unemployment — it’s not all about race, but there is a racial component. It’s something systemic and institutional, and that’s what we have to address. ESSENCE.COM: Besides the institutional problems, what does this incident tell us about the way our country talks about race in general? How can people talk openly about their experience without being punished? LEE: We have to talk about race with clarity, honesty, and without fear. It’s a tough subject. No one is going to agree with everyone on everything, but we have to create an environment that’s civil and not about attacking people. You can’t have a dialogue with attacks taking place from the Tea Party and other groups. The signs, slogans and some of the other conservative attacks on the President have been outrageous. ESSENCE.COM: Speaking of the Tea Party, what are your thoughts on the Tea Party Caucus in Congress started by Representative Michele Bachmann? LEE: Everybody has a right to form whatever caucus they want to form. We have many caucuses in the Congress, and we’ll see how many members they garner and what their agenda is. But quite frankly, when you look at the Tea Party movement on the outside, they don’t really reflect the views of the majority of the American people. If the Tea Party Caucus agenda’s going to be the same as that, then I’m not sure how much clout and success they’ll have. But we’ll have to see.