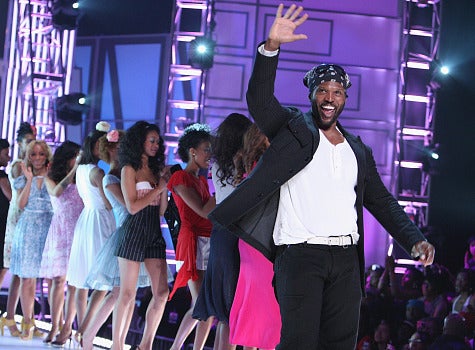 “Fashion is one of those businesses where you have to be able to take a punch, then get up and dust yourself off and keep it moving,” says a confident Byron Lars, speaking about his remarkable roller coaster ride in the fashion world since his 1991 breakout debut. It’s a lesson that wasn’t the easiest to learn for Lars, who went from being the prince of the fashion world with critically acclaimed collections in the 90’s that had high-end retailers like Saks, Bloomingdales and Henri Bendel placing an avalanche of orders for his exceptionally tailored pieces and projecting sales at $1 million, to watching his business crumble only six years later. “It was way too much, way too fast for a new designer. I felt like I wasn’t doing it for me,” explains Lars. While this major setback may have been the end of most designers, for Lars the creative process of design, not the hype surrounding his warp-speed rise to fame, was and remains his raison d’tre, so there was never any doubt in Lars’s mind that he would continue to design clothes–even if the rewards came at a much slower pace. Lars would reemerge with a successful comeback with Byron Lars Beauty Mark, an affordable collection with an haute sensibility which initially focused on offering women his signature menswear-inspired shirts that blew him up at a much lower price point. The line has since grown over the last eight years to include a full chic sportswear line. If Byron Lars Beauty Mark’s impressive Fall 2010 collection is any indication, Lars is the comeback kid who continues to flourish with a strong aesthetic that appeals to working women, but this time on his own terms. ESSENCE.com: Your latest collection is fabulous. This time you veered into new territory with splashes of color. Where did the inspiration come from? BYRON LARS: The collection is really all fabric driven. It was all about finding fabrics that spoke to us, and putting them on the wall and letting a story present itself. It’s lots of texture and color, and that is very different for us. We’re very neutral driven here, because so much of the styles are about the line, cut and stitching details. A lot of times color patterns can get in the way. Although, this time it seemed to integrate seamlessly into the whole story. It was refreshing, honestly. ESSENCE.com: You made a name for yourself in the 90’s for your deft hand at melding menswear into your collections. You still infuse your designs with such details. Where does this infatuation come from? LARS: I wanted to take items that are common and give it a dignity that befits a high-end garment. It started with my grandfather’s hunting jacket and morphed it into a “Dior New Look” feeling. I think it really spoke to people at the time. I totally agree that a woman in menswear is very sexy.  It may work with a girl just wearing her boyfriend’s shirt in the morning, but when you are out in the world, you need your own version. You’ve got a waist, hips and butt that need glorifying. ESSENCE.com: There are a lot of pieces in there that Michelle Obama would look amazing in. Have you tried getting your clothing to the First Lady? LARS: I would love to dress Michelle Obama. I think we’ve been making clothes for her for years. We finally have an “in” at Ikram (high-end boutique in Chicago), so hopefully that will happen. Keep your fingers crossed. ESSENCE.com: There are so many classic pieces are made ultra special with texture or embellishment in this collection. The colorful and printed leggings just lend so much to these looks… LARS: What people need to get them to pull out their wallets is something that they can’t resist and can’t find everywhere. There are a lot of emotional buys in this collection. There are staples too, because that’s what we do well with and what we sell, but there always has to be that special piece you need to have. We showed everything with a legging which is certainly part of our language now. It does something to change a look. When you put leggings with a uptight suit, it’s completely different. It does something that’s really magnificent for me. ESSENCE.com: Although your collection looks so modern and fresh, it’s still very much rooted in classic sophistication. How do you deal with the influx of trends? LARS: I understand the need of trends to move things forward. But, honestly, I feel like the industry is clinging so feverishly to them that you see the same thing at every price point, so you kinda don’t want it.  It doesn’t inspire you to buy. You have people thinking, “I know it will be marked down, so I’ll wait to get it cheap.” I am aware of trends and try to design stuff that aren’t so far from the trend, but I design things that you aren’t going to want to throw out next season. Even though my clothes aren’t cheap or crazy expensive, I still see many of them being investment pieces. These are pieces you can integrate into your future wardrobe plans. Let’s face it, that’s where we are now. It’s about re-discovering what you have and making it new. It’s about thoughtful and emotional pieces that speak to you. The overload on trend has shaken customer’s confidence when it comes to personalizing the way they dress. They’re afraid to try new things.

ESSENCE.com: Do you find that when you first came on the scene, women were more courageous? LARS: Absolutely, I think that even if people tended to follow the crowd back then, finding your own voice was still valued. Now, not so much. I mean I’ve been to Brooklyn and I’ve seen those young people looking great. It’s like, “I worked a little vintage in with a little of H&M and this is what I came up with.” Honestly, the ones who make something out of nothing are the ones who look more interesting to me. The ones with all the money and designer goods are looking kind of boring to me. The more things are the same, the less confidence we will have to look different. It’s not that bleak, I do see those rays of light out there. ESSENCE.com: You’ve weathered a fair amount of drama in this business. How have you seen it change over the years? LARS: It’s changed a lot for the worst. The fashion calendar worked in a way before that made sense for everyone. Now, it’s gotten very aggressive. Designers are forced to show earlier and earlier, and the stores, understandably, are committing later and later, because their confidence is shaken. You, then, have a long lag-time between developments to production that doesn’t really work for the manufacturer, so we are put in a position where we have to project based on guesses. The retailer ends up buying into whatever it is you project because that’s what they are left with. I don’t think that’s the ideal way for things to work, although I don’t have the answer, either. If you don’t make guesses and produce something, you’re not gonna have a season at all. ESSENCE.com: I doesn’t help that there is more and more product for an increasingly smaller market share… LARS: Especially with every half-celebrity trying to create a clothing line. That’s why the industry has become a contest of who can scream the loudest, in terms of PR and marketing. Clearly, you do need PR and noise to make things work, but that’s not what makes things last.  ESSENCE.com: Today, it’s much easier for women to be fashionable at a modest price with the slew of disposable retail chains across the country. Why was making Beauty Mark accessible to all women an important goal for your line? LARS: Once my namesake line had tanked, because my original Japanese backers had backed out, I was thinking, “how am I gonna do this in a different way?” My clothes, at that time, had been very expensive, and there was no place to purchase cool and affordable clothes. That always disappointed me. I met so many cool young people who loved my stuff. They went to Saks, tried on one of my jackets, it looked great but they hung it back up. How can I reach this customer? I started with this T-shirt line called Green T. All the stores that were carrying Green T kept asking about those great shirts I did in the 90’s. I just heard that request so much that it was like scoffing at a blessing. I pretty much acquiesced and made them and shipped it. Creatively executed shirts alone don’t fill you up, so it had to expand. Lately, the dresses are becoming equally, if not, more important than the shirts. ESSENCE.com: You’ve said that the rapid success you attained with your first couple collections was not healthy. Can you elaborate? LARS: It all happened so fast. Honestly, I was making stuff in my living room one day and the next day I’m trucking it out for models with Calvin Klein. That’s wrong, you know? I had my fifteen minutes and I was everywhere. It was very unnerving because my business outgrew my experience overnight. My baby was smarter than me in three months. It was too fast and it really should not happen that fast. It’s fine, if you’ve been gaining your experience and then you have a growth spurt. To go from zero to sixty so fast, you could never, at least I don’t believe, sustain it. Everyone is telling you what you are to them and you don’t even know what you are yet. I knew it was a good thing but it did not feel good most of the time. I think it’s because I did not have the experience that was required. For me, it isn’t all about blowing up and being everywhere. It’s about the craft. Read more: