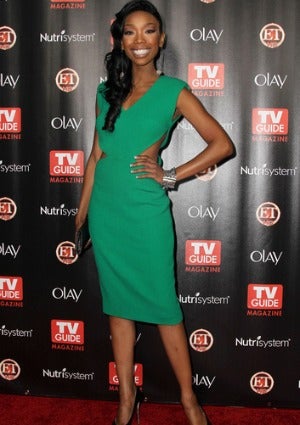 To call the past couple of weeks “tough” for Brandy would be an understatement. Despite being brutally eliminated from “Dancing with the Stars,” the Grammy-winning singer is putting on a smile and moving forward with the next chapter in her life: season two of  her VH1 reality show, “Brandy and Ray J: A Family Business.” The singing starlet opened up to ESSENCE.com about her sudden elimination, why she left feeling “reawakened as a person and an artist,” searching for a soul mate, and what to expect this season of “Family Business…” ESSENCE.com: What was your gut reaction when you were eliminated? BRANDY: Honestly, I was very numb. I didn’t quite process it all when it first happened. But of course you could see I was very emotional. I really wanted to experience the final and do the freestyle with Max and see who I would have become. I really wanted to get in touch with that part of myself and that’s another level of competition. But it didn’t happen. What I walked away with was my confidence and my power and my strength. I felt like I conquered a fear. ESSENCE.com: What do you want people to know about your experience on “DWTS?” BRANDY: That it was an amazing experience. I was so nervous in the beginning and afraid to put myself in a position to have to overcome something like that is amazing. I think that everyone out there can do the same thing. Whatever you’re afraid of, you should face your fears and realize that there was nothing to be afraid of. I reawakened as a person and as an artist. ESSENCE.com: Now on to the second season of “Family Business.” How do you manage handle mixing family and business? BRANDY: It’s hard having a personal life, a family life, as well including family in your business life. It takes a lot of focus and balance. When relationships are built on the foundation of love, you can conquer anything. Ray and I go through a lot this season. We never really argue and fight in that way. But you’ll see we’re battling a little bit. Some of the choices he’s making, I’ve made in the past and they were not the best choices. I don’t want him to go down the same road. It’s hard when you’re an adult and you’re growing into your own person. As his sister, it’s my job to let him in on some of the things I’ve been through. This season you’ll also get to see me coming into my own with “DWTS” and trying to find love. ESSENCE.com: You mentioned we’re going to see you find love. Will you be using the Internet or are friends hooking you up? BRANDY: My best friend Shay is trying to hook me up with different people. I’ve been very open to dating and going out to dinner here and there. Before I wasn’t open and never wanted to go out and meet people. ESSENCE.com: What changed? BRANDY: Because I’m 31 and sometimes I feel alone. It’s been six years since I’ve been in a serious relationship. I feel like if I’m not open to different possibilities then I’ll never get the chance to love my soulmate. I’m just trying get out there. I could meet him in the grocery store but if I never go to the grocery store, then I’ll never know! ESSENCE.com: This season we’ll see you struggling with the decision to join “DWTS.” Looking back, do you think you made a good decision? BRANDY: I definitely feel like I made the right decision. I was nervous in the beginning because dancing has never been something I’ve been comfortable doing. I didn’t want to embarrass myself and I didn’t want to disappoint the fans. I was too afraid and when you’re that afraid of something, it’s a calling to face it. I haven’t felt this inspired in so many years. I’m in great place right now. ESSENCE.com: Will we get to see you parenting this season? BRANDY: My daughter is not on the show these season. It’s difficult because I want to make the right decisions for her. Being on TV every single week doesn’t feel like the right thing to do at this point at all and her dad is not for it. I hate to admit it, but she has the entertainment bug. ESSENCE.com: Is it true that your parents will begin diminishing their role in yours and your brother’s career? BRANDY: Once you get a certain age and you have your own vision, you kind of have to take control and get in the driver seat. It’s good because you don’t want anyone else controlling your career. You want to take advice from your team, but at the end of the day you need to be in control. ESSENCE.com: Tell us about your new album, “Brandy and Ray J: A Family Business.” BRANDY: It’s the soundtrack to “A Family Business,” our show. My dad and my brother brought the project to the table. We all thought it was a great idea. It reminds me of when we were kids. That’s all we use to do is sing together. To have a project featuring him and featuring our friends is exciting. Brandy and Ray J: A Family Business” premieres this Sunday, December 5th at 11pm EST on VH1.