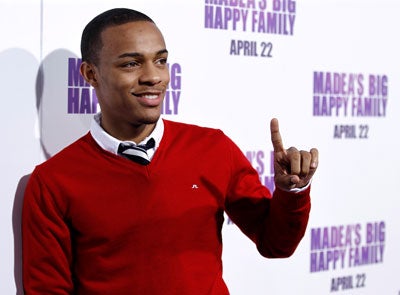 Every once in a while, a rap star crosses over to movies with success — by my count it’s been years since we’ve seen it done well. This Friday, Bow Wow will hit the silver screen like you’ve never seen him before. With a standout performance that’s heart-wrenching, Shad Moss (his government name) stands a chance to be our next big crossover star. Of course, we’ve seen him in movies before, but he can now rightly be called a thespian.

ESSENCE.com caught up with Mr. Moss to talk about playing in his first Tyler Perry film, working with the great Loretta Devine and more…

ESSENCE.com: Byron is character who has a very troubled past and has to constantly live with the temptation to fall back into that lifestyle. What was it like to take on that kind of character?
SHAD MOSS: For me it was simple. That’s because I’m an actor — I try my best and I don’t really think of it too deep. I go in and make it happen. I didn’t have to prepare and I didn’t really dig any where or do anything to make this character stand out or make him seem believable. No preparation like that.

ESSENCE.com: Your character has to constantly deal with baby mama drama and pressure from your new girlfriend. What do you think the movie says about Black love?
MOSS: Not necessarily Black love but love period… it’s not really a Black thing or a White thing. It’s a love for family, it’s loyalty, it’s bond, it’s how can we make it through tough times, how can we manage to stay strong through tough moments. That’s definitely something we display on camera. It’s a love family thing, it can go across the board.

ESSENCE.com: There’s a scene in the movie where things get really rocky and the emotions pour out. As an actor, how were you able to pull out that kind of emotion?
MOSS: It was easy, it was simple. When you work with a sweet woman like Loretta and you feel her heart. She really makes you feel like you’re one of her own — whether you’re her grandchild or kid, you just feel. It was nothing for me to cry, and coming off of “Lottery Ticket,” I really care for Miss Loretta Devine. When you care about somebody you never like to see someone in that type of situation where they’re lying on a hospital bed dying, and that’s something I can’t picture.

ESSENCE.com: Tyler Perry praised you yesterday and said you have a lot of talent and have the potential to go so far in this business. What did you learn from him?
MOSS: Just to be patient and take my time and to don’t be afraid to go there. Out of all the roles I’ve done, I’ve gotten the most compliments on this one. For people to say that about this particular role means a lot to me. It let me know I’m stepping up and elevating my game and I’m bettering my craft and that’s good thing. It feels good to have legends like Tyler or other great actors say those things. It makes me want to continue to go harder and to get more challenging roles.

ESSENCE.com: What’s next for you?
MOSS: What’s not next? I just wrapped this other movie called “Recall” and that’s an army movie and I got another movie I’m getting ready to start in May and it’s called the “Lone Fish Party.” That’s next up and I’ll be in Toronto for the next two months. Besides that, me and Ice Cube we just inked this deal together to produce my new sitcom. A lot of big things are about to pop off.