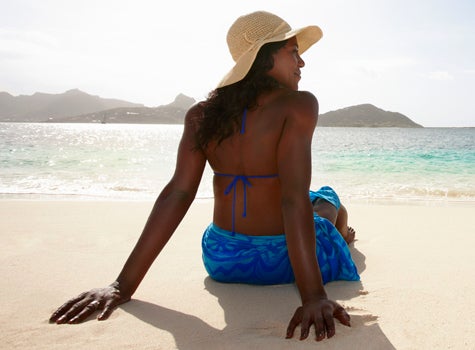 Alarming new research was just released from the American Medical Association and will be published in this month’s “Archives of Dermatology” — serious institutions with serious warnings — about Black women diagnosed with skin cancer having a higher rate of death than other races. ESSENCE.com discussed these new findings with one of the most respected physicians in the country, Susan C. Taylor, M.D., who is an internationally recognized expert in dermatology and trained at the University of Pennsylvania and Harvard. Taylor has been the top name in dermatologic and cosmetic needs of the Greater Philadelphia area since 1989. She was also appointed the Director of the Skin of Color Center at St. Luke’s Roosevelt Hospital Center in New York. The Center is the first of its type in the nation. ESSENCE.com: At a meeting of the American Medical Association this summer, a resolution was passed calling for “greater skin cancer prevention efforts aimed at communities of color.” But dermatologists who made the call report that they have a challenge: there are Hispanic and Blacks who say “We do not get skin cancer.” This is unfortunately — and dangerously — not the case, but it’s a common misperception, why? DR. SUSAN TAYLOR: Many people feel that because the melanin pigment in their skin protects them from sunburn and premature aging, that it will also protect them from skin cancer. Additionally, they have had very little or no education regarding their risk of skin cancer — physicians do not make them aware of the risks and there have been very few public service announcements — or prevention strategies. ESSENCE.com: So while it is true Black individuals have a lesser risk than Whites for skin cancer — and the deadliest form of it, melanoma — they still have a potential risk, regardless of how dark the coloring of their skin? TAYLOR: Yes, that is correct. Also, often in Blacks, melanoma occurs in unusual places such as on the palms and soles, fingernails and toenails and on the mucosa of the mouth and genitals. A dark streak running the length of a nail may be a sign of melanoma. Often these signs of melanoma are missed and the disease progresses. ESSENCE.com: A recent study of melanoma patients in Florida found advanced cases in 12% of Whites, 18% of Hispanics and 26% of Blacks. Why, if the risk is so much lower for the Black population, is the mortality rate actually higher? TAYLOR: Mortality is higher for the Black population because the diagnosis of melanoma is made at a later stage. This is primarily because patients do not think that they can develop melanoma so they do not examine their skin regularly, nor does their physician, and hence it is not identified at an early stage. Additionally, patients and physicians may not know how to diagnose melanoma in Blacks because it can develop in unusual places and have an unusual appearance. ESSENCE.com: So, percentage-wise, more Black people are dying form skin cancer like melanoma than White people? TAYLOR: Not exactly. The number of Whites dying from melanoma is still higher than Blacks because so many more Whites as a whole develop melanoma. ESSENCE.com: And women are an elevated level of risk. Between 1980 and 2004, the annual incidence of melanoma among young women increased by 50 percent, from 9.4 cases to 13.9 cases per 100,000 women. Women aged 39 and under have a higher probability of developing melanoma than any other cancer except breast cancer. It seems that the breast cancer awareness has reached Black women, but not so much with skin cancer. Why? TAYLOR: Again, it is related to the fact that Black women do not realize their risk for developing melanoma because of the lack of education. We need to ensure that our public awareness campaigns reach Blacks. ESSENCE.com: The most shocking new data is coming out in this month’s issue of “The Archives of Dermatology,” on the new study done in the Sunshine State of Florida, which found that compared to national rates, incidence of the potentially deadly skin cancer melanoma was 60 percent higher among Black women in Florida compared to those in the rest of the nation, and 30 percent lower for Hispanic women. This seems like an urgent message for Black women. You’ve been a catalyst for so much prevention and detection of skin cancer in people of color, did you find the Florida study alarming? TAYLOR: Yes, of course but the message that Blacks do develop skin cancer and die from melanoma at higher rates than Whites is not new. It reflects the fact that education regarding prevention and early detention is not getting out. ESSENCE.com: Do you believe the awareness effort should be greater throughout the country since the new findings in this research — because the indisputable reason for Black people with melanoma being more likely to die than the White people was later detection? TAYLOR: Absolutely! We need to get this information published in newspapers, magazines, on T.V. and radio as well as in doctor’s offices. ESSENCE.com: Not easy though, since after years of warnings, you still see fair skinned White people oiling up and sunning themselves, going to tanning beds. The indoor tanning industry has an annual estimated revenue of $5 billion. What’s the most effective way to warn people, especially Black women, that they are at risk? TAYLOR: Have them hear stories of women who look like them who have developed melanoma. ESSENCE.com: What advice or guidance would you give to an African-American woman reading this report — for herself and for her family — to avoid becoming part of this disturbing new data? TAYLOR: Please examine your skin monthly and see a dermatologist yearly for an examination of your skin including your palms, soles, nails and mucous membranes.