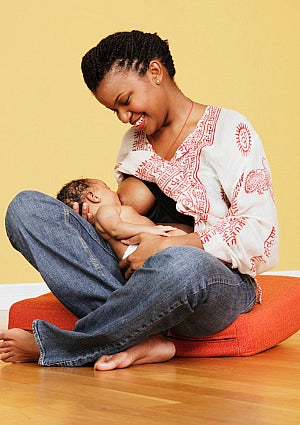 A recent study found that African American women breastfeed less than women of other races and that a higher percentage of Black women are more comfortable with the idea of formula-feeding babies. There have been a number of breastfeeding initiatives from the US government, hospitals and non-profit organizations to teach Black mothers the benefits of nursing but these initiatives “must also include messages regarding risks of formula feeding,” the study’s author told Business Week. While breastfeeding is said to give babies a more complete combination of essential nutrients, a study released last week revealed that most babies in America are not getting the recommended amount of Vitamin D. Babies who receive breast milk are at a higher risk of Vitamin D deficiency. Moreover, Black mothers have a harder time producing Vitamin D, which is necessary to support healthy bones and strong immune systems, compared to lighter-skinned people do when exposed to sunlight. Among other benefits, breastfeeding is said to protect against gastroenteritis and respiratory infections as well as reducing the risk of heart disease later in life. It’s also said to promote high I.Q. development, facial structure development, and improved speech. For mothers, breastfeeding is said to reduce the risk of breast, ovarian, cervical and endometrial cancers, which Black women are at high risk of. So, which is better? It seems the healthiest solution might be a regimen that combines breastfeeding and formula-feeding with an added vitamin supplement. This could also be the way to go to get mothers who aren’t enthusiastic about nursing all the time to incorporate it into their feeding routine. Read More: