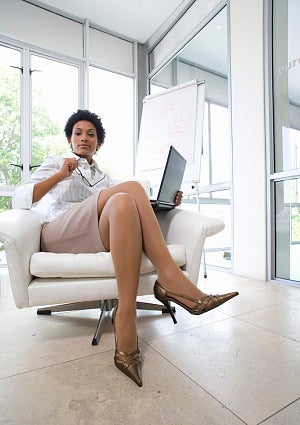 If I could, I would climb under a rock. That’s the only logical way I can think of to avoid the onslaught of articles, primetime TV segments, books, and countless blog discussions lamenting “The Black Man Shortage.”  (TBMS)

TBMS is something like the Black girl equivalent of those end of the world movies that come trotting out every three-day weekend to thrill us with CGI effects, remind us of the importance of family, and most importantly, churn out hundred million dollar returns for a big studio.  Whenever anyone in media needs some sort of ratings bonanza or send their website’s comments section into a frenzy, they– the most recent being “Nightline“ – trot out a story about TBMS, a horrific tale of no love and lots of loss that depicts a single Black woman from [insert any urban center here] clinging to a half-empty apple martini, a Louis Vuitton Damier Speedy or a perfectly-coiffed girlfriends.

I watched the Nightline segment on YouTube the day after it aired (I was trying to avoid it, but my Blackberry Inbox blew up with emails titled “Have you seen this?”)  I yawned my way through all the stats that I’ve heard so often they run through my head like a CNN ticker:

*If every Black man in America married a Black woman today, one out of 12 Black women still wouldn’t make it down the aisle if they hoped to marry a Black man;

I stared blankly at my Mac screen as yet another batch of extraordinarily beautiful (the woman with the dimples? Gaw- geous) and successful Black women lamented their loneliness. I kept staring, even added an eye roll, as Steve Harvey suggested single Black women date “older men.” (Oh, that’s all I have to do?) I watched, added a side eye for emphasis, and I wondered… three things. The first of which was, why are we still talking about this?

The Washington Post gave good ink to this topic two weeks back. Oprah covered it when Harvey’s bestselling relationship guide dropped earlier this year. CNN dedicated the vast majority of its first “Black in America” to this subject. Terry McMillian’s been talking about TBMS to the masses since at least the 1980s. The very first ESSENCE had a coverline, “Black Man, Do You Still Love Me?”… in the 70s. The Moynihan Report documented this problem back in the 60s when the Black marriage rate still hovered around 62%.

Fifty years later, we’re still talking, but what are we doing about it other than re-hashing the same material? Where’s the action? (And by action I mean more than advice like, “date older men.”)

You know what else I wondered? Where are the news stories about White girls and Latinas and Asian ladies who can’t find a good man? Don’t they have issues too? Cause the ones I know are in my single boat, rowing around the Hudson River with me and looking for love too. There’s this entire fictional franchise called “Sex and the City” (maybe you’ve heard of it?) dedicated to White women’s search for love in Manhattan that women of all colors flock to in droves because its relatable. You know why it’s relatable?  Because 51% of American women are living without a husband, i.e: they are single.  This is the first time in American history that more women are single than married. Fifty-one percent of Latina woman are unmarried, so are 45% of non-Hispanic White women, and 41% of Asian women.

So all that makes me wonder, where are the stories about all these American (ie, not just Black) women? Why are women who are hued like me always trotted out for national viewing as lonely (and sometimes desperate), with the not so subliminal subtext that Black men just can’t show no act right? Why are we always the ones chosen to sit in freshly-permed groups in chic bistros discussing dating hardships like we’re the only ones facing them. Why is what is largely an American woman problem being so widely portrayed as a Black woman’s problem?

Last but not least, I wondered, where are the men in this discussion? I mean, yes, you have Steve Harvey on set, but he’s a relationship expert and further, ineligible to date as a married man. I’ve never understood why in all the roundtables about why so many women are single, no one ever just asks a batch of men, “Hey, what’s keeping ya’ll from putting a ring on it?” Or better, why no one ever gets the single men and women who are supposed to be pairing off with one another into the same room to discuss why they’re not getting together. Isn’t talking about heterosexual relationship problems and attempting to solve them in same-sex groups absolutely pointless?

Which got me back to the point of wondering what the whole point of still just talking about single Black women and the Black Man Shortage was to begin with.

I Kanye shrugged, closed my Mac and turned on my TV to get my mind off Nightline.

Guess what was on?

An end of the world movie.


Demetria L. Lucas is ESSENCE’s Relationships Editor and the author of ABelleInBrooklyn.com, where she muses daily on love, sex, dating, and relationships.