A Black teenager who was tackled and manhandled by a police officer in 2015 has reached a settlement with the officer and the city of McKinney, Texas after filing a federal lawsuit.

Dajerria Becton, who was 15 at the time of the assault, has received $148,850 from the settlement, her lawyer, Kim T. Cole, told Teen Vogue. 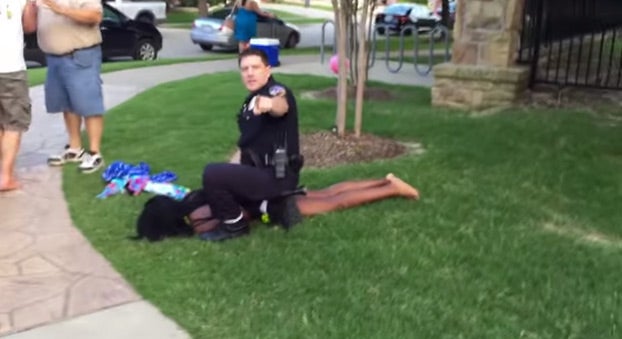 15-year-old Dejerria Becton was forcefully grabbed by former officer Eric Casebolt after an incident at a Texas pool party in 2015.

“This girl will never be the same,” Cole said. “Anyone who has been a teenage Black girl knows how hard it is, and to have this type of negative publicity, in your bikini, shown all over the world. It tore her up. We don’t know who she would have been had this not happened.” Cole added that Becton plans to throw another pool party for her client to celebrate the settlement.

Former McKinney police officer Eric Casebolt was caught on camera aggressively manhandling Becton, who had been at a pool party with friends. Video footage of the incident showed Becton being dragged and pinned down as Casebolt attempted to disperse a group of teens while responding to a call complaining of a disturbance at the pool party. Casebolt resigned four days after the incident, and no indictment was brought against him.

In 2017, Becton and her legal guardian, Shashona Becton, filed a federal lawsuit against the city and police department, seeking $5 million in damages for “mental anguish, loss of quality of life, and attorney fees.” She was awarded  $148,850 in May, according to CBS-DFW.

“While the events precipitating this case are regrettable, the City of McKinney and the McKinney Police Department would like to express their thanks to the community for its commitment to inclusiveness, order, and unity,” the city said in a statement following the settlement.

The pool party for Becton, and the other teenagers detained with her, will take place this weekend to celebrate their graduation and the end of the lawsuit.