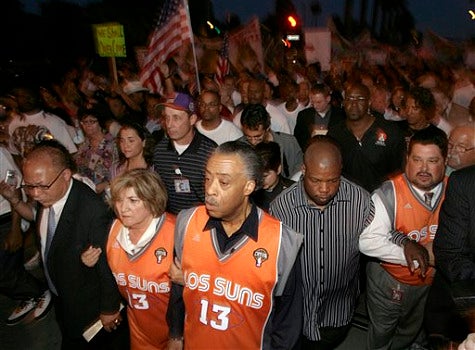 Black leaders like Rev. Jesse Jackson and Rev. Al Sharpton are protesting the recent Arizona immigration law as more than an assault on Hispanic immigrant rights, but also an assault on everyone’s civil rights… Rev. Jackson recently responded by sending a letter to Major League Baseball Commissioner Bud Selig, asking him to pull next year’s All-Star game out of the state. “America’s democracy is based on the values of freedom and equality — a level playing field for all of its people,” he said, calling the law a form of “terrorism for the innocent.” Reverend Al Sharpton has also shown his support by joining leaders from the Hispanic Federation in their pledge to challenge the controversial bill in court. Sharpton took to the streets of Phoenix to march against the law.  “This is a not a fight between minorities, this is a fight for justice,” he said. African-American fraternity Alpha Phi Alpha has also chimed in by pulling its annual convention from Arizona to set an example for other organizations. “We could not host a meeting in a state that has sanctioned a law which we believe will lead to racial profiling and discrimination,” read a statement from the organization. Never one to hold his tongue, retired NBA player and now analyst Charles Barkley called the law a form of racial profiling. “Most of those immigrants here are busting their hump, doing a great job, and to go after them every couple years because you want to raise hell doing something to get re-elected, that’s disrespectful and disgusting,” he said.   What do you think of the new Immigration law in Arizona?