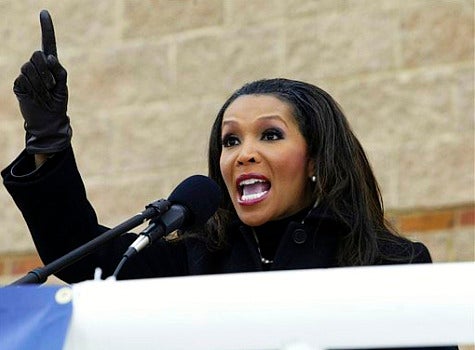 Angela McGlowan has been drawn to politics for some time — as a conservative commentator for FOX News and BET, and author of “Bamboozled: How Americans Are Being Exploited by the Lies of the Liberal Agenda” — but this year she stepped into the arena as a candidate. She’s got some company, too. Running in Mississippi’s first congressional district, McGlowan is one of 32 Black Republicans campaigning for the U.S. Congress this primary season. It’s the largest showing since Reconstruction. “I was asked to do this,” says McGlowan, as she recounts recruitment from jobless voters in her hometown of Oxford, Mississippi, and impassioned protestors who approached her at Tea Party demonstrations. The self-described “controversial sister trying to make things happen” cites less federal spending, more tax credits for small businesses, and reforming education, particularly for special needs children, as her priorities. She spoke to ESSENCE.com about the curious influence that President Barack Obama has had on Black Republicans, the suggestion that she’s a poster child for the right, and whether or not Black candidates on the GOP ticket generally stand a snowball’s chance of winning. ESSENCE.com: What do you think is behind the boom of Black Republicans running for Congress? ANGELA MCGLOWAN: There has been this myth that there are not many Black Republicans out there. Well, there are. Compared to Democrats maybe it’s not a lot, but people think there’s just one or two. And this is an election year like no other. I have not ever recalled such a bad economic time, and you have a lot of people who are fed up with politics as usual. In the past, we had common folk — accountants, even an exterminator — run for office, and I think that’s what you’re seeing now. I also think Barack Obama being elected President has paved the way for more Black people to say, “Hey, we can do it!” It takes hope to be able to run, and even though he may have given hope to people on the right side of the aisle, we’re all Black people in this. Whether you’re a Democrat or Republican, the first Black President has made a difference in our lives. ESSENCE.com: What about the election of Michael Steele as the Republican National Committee Chairman? Do you think that’s played a role in inspiring more Black Republicans to run for office? MCGLOWAN: Can’t answer that. Sorry. ESSENCE.com: Okay… do you not want to speak about Michael Steele? MCGLOWAN: I think that it is a great feat for Michael to be RNC Chair. But we have to judge by the content of one’s character and qualifications; not just because he’s a Black man. I know I’m contradicting myself here. Basically, I think it’s great that he won that, and I’m not going to comment on him further. I think the President, as the leader of the free world, is more inspirational if you put it in perspective. The President of the United States. RNC Chair. There you go. ESSENCE.com: You were encouraged to run by members of the Tea Party. There’s an argument that Black Republicans are elevated and cheered on by White conservatives, or that you’re tokenized– MCGLOWAN: Ohhh, Cynthia! I can’t answer for what other folks do. I can’t answer whether or not they’re pimping anybody. But I’m not a poster child. I won’t be put in front of a camera like a Black Barbie doll. If I ever think that’s happening to me, it’s going to be on. And if any people of color have joined this movement because they want to be on the forefront, and I don’t think they have, then that’s a shame. I’m certainly not doing that. I want people to vote for me in this district because of what I stand for.    ESSENCE.com: What’s the response you’ve received from your constituents? MCGLOWAN: I do coffee meet-and-greets at my campaign headquarters. One time, I had about 40 people show up, and 30 of them were Black. I’m having Blacks stop by my office, knowing that I’m a Republican, and tell me that I’ve inspired them. ESSENCE.com: And from White voters? MCGLOWAN: From White voters I’m getting a lot of support, but I gotta tell you — I’ve had to meet with officials because we have gotten death threats. I’m the first Black female to run in this district in the history of Mississippi. There is a website where I’ve been called “the Negress” and a “filthy pig.” My two opponents are older White males. Some of their supporters took a picture of me and altered it to make my skin darker, turned up my nose, and kinked up my hair. They put it on a flyer saying that I don’t want White people to have guns. My staff and I have been threatened with calls. People in the street have come up to me being hostile. But it’s a small, ignorant minority. ESSENCE.com: Given all that, plus the fact that most African-Americans vote for Democrats, do you think many Black Republican candidates have a viable chance? MCGLOWAN: When Colin Powell was going to run for President and he stepped down, so many people were upset because they believed in him. He led by example. I think that if you are a darn good leader, it doesn’t matter what color your skin is. Look at Gary Franks and J.C. Watts. It depends on the candidate, and how they articulate what they’re going to do. Right now, poverty knows no color. I’ve had White and Black people come to me and say they want a job. If this were a normal election year, you might be right to question the viability of Black Republican candidates. I just know now people are voting with their pocketbooks.