While fashion week may seem all glitz and glamour, backstage is an entirely different experience, particularly so if you are a Black model. Runway-favorite, Leomie Anderson has walked countless shows during fashion week —or month, depending on whom you ask—since her debut in 2014. Never one to shy away from honest conversation, Anderson took to Twitter to vent her frustrations about lack of diversity in the industry and the ill preparedness of both make-up artists and stylists when it comes to dealing with Black models. 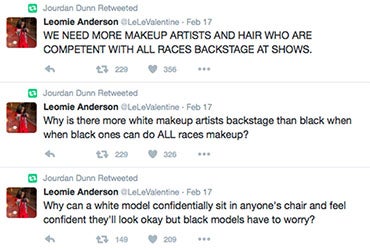 This is not the first time Leomie has ousted the industry; last season the model uploaded a video to her Instagram and personal blog, Cracked China Cup discussing the hairstylists lack of knowledge about dealing with textured hair.

See the graft behind the glamour for us models during fashion week in my latest vlog, link in bio and if in 2015 you as a hairdresser don’t know that water makes black hair go curly/ frizzy please quit xx

It’s an old conversation—models like Nykhor and Jourdan Dunn have each voiced their complaints—that the industry seems to have turned a deaf ear to, even though the number of Black models has increased since the days of the first Black supermodels, like Iman and Naomi. Having covered backstage at fashion week for six seasons now, I can attest to the very evident struggle of Black models. In a sea of white makeup artists, often times there are only one of two Black make-up artists backstage, even less when it comes to hair artists.

As a beauty editor at a Black publication, scouting Black models is often tough enough, but finding Black stylists is even more difficult. So much so, that when myself or another editor go backstage to cover a show, if there are more than two people of colour (model, stylist or otherwise), we’re giddy. If there are Black models and Black stylists—well, that’s just an instance worthy of a praise break. Such was the case backstage at Thom Browne this season, where Jimmy Paul was the lead stylist for Bumble and Bumble. His crew was a healthy mix of both Black and White stylists, each assigned to work on models who seemed to fit their beauty pedigree. Generally, when I see a model with natural hair I cringe when they sit down in a stylists chair and watch in horror as uninformed stylists matte down their natural curls with hair sprays or curling irons that are obviously too hot. Black models are often sent down the runway with heat damage and sporting a style that does not mimick the aesthetic of their fair skinned counterparts.

It has been 41 years since Iman made her modeling debut in 1975 and the modeling industry is still only 2% Black, a notion that model and new Maybelline Ambassador, Herieth Paul brought to light in a recent interview with CBS, “There is a lot of work that needs to be done, because out of 100 percent of models, there are only two percent black, and three percent Asian; so we need to change the numbers,”. Minority representation needn’t only change on the runway, it also needs to change backstage; beauty crews should reflect the girls that are walking the runway, this means hiring makeup artists who are equipped with foundations that suit all skin tones and are knowledgeable about how to translate the desired beauty look for a show onto Black skin, so that models don’t look ashy or unforgivably undone as they strut that runway. Additionally, a cultural shift must occur so that Black models are viewed as being equally important as their white counterparts.

Those “stuttering fingers” that Anderson mentioned in her Twitter commentary are all too common. Black models are seemingly the after thought at so many shows as they often seem to be the last on the model roster to be styled, and often, if their hair is natural and worn in a close crop they generally do not get styled or accessorized as the other models. Case in point, it’s time that the industry stop asking Black models to apologize for their texture or the tone of their skin and make the necessary changes to embrace—and perhaps even celebrate—the versatility of Blackness. After all, having the proper shade of makeup in your kit, or the ability to style textured strands, is not a courtesy—it’s your job as a stylist/artist.