The revolution may not be televised and it may even be silent but it will impact every industry.

Men’s Fashion Week in New York City got a wakeup call when a group of activists, led by blogger/model Hannah Stoudemire, put on a silent and powerful #BlackLivesMtter protest addressing police brutality and inequality in the justice system.

The group made their way to Skylight Clarkson Square — one of the main venue for the fashion shows — and stood firmly together, silently holding up a sign that read “Black Lives Matter,”  while also donning shirts that read “Stop killing us,” “Walter Scott,” and “Sandra Bland.”

“I work in the fashion industry and I noticed none of the designers cared about it,” Stoudemire told Mashable about why she decided to make a statement. “I’m the only black employee for a major [fashion] house on Madison and everyone seems not to acknowledge what has happened. There’s no condolences. There’s nothing. When it comes to a matter of life or death, a dollar sign shouldn’t come into play.” 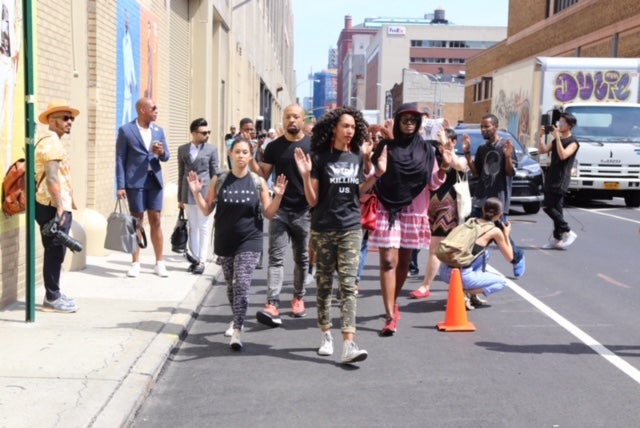 Stylist to J.R. Smith and Lebron James, Rachel Johnson joined the protest and revealed that to her this movement is bigger than reputation and status. “There’s no one in this country that cannot ignore this. I’m a black woman. That comes first for me before any status or kind of popularity or opinions people have of me. This is about humanity,” she said.

When it comes to the fashion industry, Black Lives Matter may not be as popular of a topics as say, the latest trends or the rise of unisex clothing — but it has made some powerful appearances.

Fashion insiders were very vocal when news broke about the senseless killing of Alton Sterling and Philando Castile. Designers like Kerby Jean-Raymond of Pyer Moss have taken a definitive stance on the movement, using fashion to bring light to the names of men and women who’ve lost their lives to police brutality.

As more and more attention is put on the relationship between the justice system and African Americans, it looks as if the fashion industry will not go unheard.