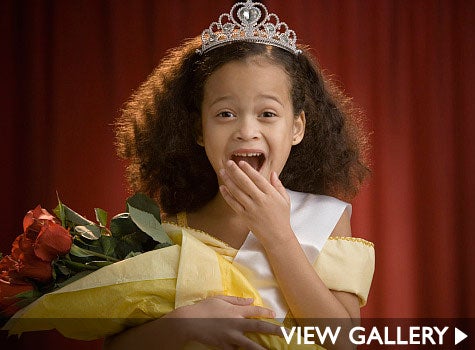 For most five-year olds, dressing up in Mommy’s stilettos and lipstick is a rare treat. But for pint-sized beauty queens, this is far from child’s play. According to “The Tyra Banks Show,” there are over 25,000 annual kiddie beauty pageants, which generate revenue to the tune of five billion dollars. And if child pageant-themed reality shows like “Little Miss Perfect” and “Toddlers and Tiaras” are to be believed, the number of little Black girls competing for the crown is on the rise. So, is putting false lashes on a preschooler simply a harmless act or just plain sick? Ericka Dunlap, Miss America 2004 (the sixth Black woman to hold the title) and “Little Miss Perfect” judge claims that child pageantry can actually improve the self-esteem of girls of color. “As a contestant in children’s pageants in the ’80s, I made it my goal to exemplify beauty from the inside-out,” Dunlap explains. “The purpose of being titled “Miss-anything” is for a young lady to represent a given community or group.” Hmmm. Dunlap’s stance seems honorable, yet watching “Little Miss Perfect,” most of us find it hard to stomach kids as young as two getting spray-tanned, hitting sexed-up poses for heavily airbrushed “beauty” portraits, and being force-fed Pixi Stix and Mountain Dew to stay alert on competition day. Despite supporting sorority cotillions and church debutante balls, our community doesn’t traditionally embrace the pageant aesthetic–so it’s startling when Black girls occasionally pop up on these shows. According to Dunlap, it’s a new day. “Our girls need to know that they too can compete and win against blondes, brunettes and redheads as I did in the 2004 Miss America pageant,” says the aspiring country music singer. “When I see beautiful little mocha babies and chocolate drops in these children’s pageants I advise their parents never to throw the race card,” she adds. What about the overzealous parents who evoke ugly memories of JonBenet Ramsey? “I’ve definitely seen stage parents who need to take a chill pill!” admits Sharon Elcock, a top model booker who prefers to have her 9-year old daughter build self love through African drumming and dance. “Pageant parents look at what they’re doing for their children as a business, and it is. Whether it’s for a crown, sash, or financial gain, they’re in the business of promoting their child.” Dunlap agrees, adding that, “some of these parents are repugnant creatures who never accomplished their own goals and are therefore demanding unattainable perfection for their children.” In a society where our girls are more likely to be exposed to images of rapper Nicki Minaj than First Lady Michelle Obama, there’s also concern about the way pageants sexualize their underage contestants. Forget pigtails…five-year-old girls are becoming pros at hair extensions. Third graders have been forced to wear girdles under their pageant gowns, and many little girls perform tarted-up dance routines as their “talent.” Despite the crazy criteria, when little Shaniqua wins a pageant over her blonde haired, blue-eyed peers, many consider it an accomplishment–but is it, really? When a Black girl lands the crown, she’s often the first or the only, so one can’t help but wonder if she’s simply viewed as a novelty. One woman who doesn’t plan on finding out is Karean McKellar-Thurston, a 34-year old Black mother in Long Island, New York. Thurston says that she has been approached repeatedly by talent scouts to enroll her 5 year-old daughter Jasmine and 12 year-old daughter Dominique in pageants. “At first, I actually considered pageants for my girls, but my husband made me see the bigger picture,” Thurston explains. “He reminded me that kids need to be kids and these pageants can make them too vain at a time in their lives when they should just be having fun.” Do you watch television shows like “Little Miss Perfect” and “Toddlers & Tiaras”? Where do you stand on child beauty pageants: are the girls too grown for their age or is it just harmless fun and possibly good exposure for Black girls? Read More: