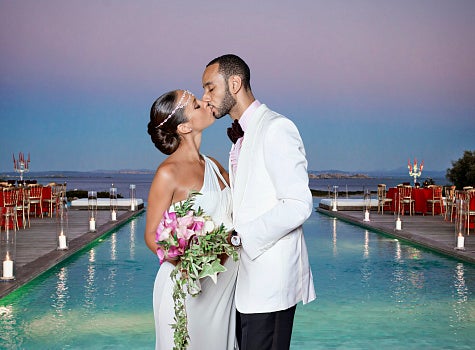 Recently, the media has led us to believe that Black women are not marriage material. If you’re young, successful and educated, you are doomed and will die lonely. They have even come up with statistics touting the number of Black men who are in prison, unemployed or gay to further confirm why we’ll never be able to have our knight in shining armor “put a ring on it.” The summer of 2010 has been a delightful explosion of Black celebrity weddings. Most recently, Alicia Keys and Swizz Beats, DJ Jazzy Jeff and Lynette Jackson, and T.I. and Tiny have all jumped the broom. But we’ve also learned about the recent nuptials of Martin Lawrence and Shamicka Gibbs, La La Vazquez and Carmelo Anthony, Paul Pierce and Julie Landrum as well as Kevin Lyles and Erica Jones. I don’t know about you but I have been jumping for joy for these celebrity couples. I can hardly wait for Nightline to do a follow-up segment to their two-part series where “relationship experts” insist that Black women should “lower their standards” in order to become wife material. It hasn’t suddenly become “hip” for Black celebrities to confess their love to their significant other; granted Jay-Z & Beyonce still have not publicly admitted that they are married but we all know the deal. Hollywood’s two top leading male actors, Denzel Washington and Will Smith are both married to beautiful Black women and have been for years but there’s nothing newsworthy or exciting about a Black woman being happily married. This sudden surge of celebrity weddings is a huge plus for the Black community. HUGE! Society has always needed to see positive images of beautiful, Black couples (weddings) in the media. Let’s face it…as a child the only married Black couples I saw on TV were George and Weezy Jefferson and James and Florida Evans; two extremes on two very different ends of the spectrum. My teenage daughters may not know that Kevin Lyles or Martin Lawrence are married men but I’m certain they’re fully aware that Beyonce and Alicia Keys are now married women. Again, this is a plus for the Black community. Many people tend to use the phrase, “perception is reality.” Up until recently, the “perception” has been that we are not marriage-worthy. Hopefully this new wave of celebrity weddings will change that. As the owner of ChocolateBrides.Com, a bridal website that promotes Black love and weddings on a daily basis, I don’t always receive buzz like the many gossip websites that promote scandal and controversy. However, if these celebrities continue to get married and show the Black community that Black Love can be just as exciting as controversy and drama, then the tide will turn. Nevertheless, if celebrities aren’t enough to show the Black community that love, marriage and healthy family life is attainable, we have President Barack Obama, First Lady Michelle Obama and First Daughters Malia and Sasha to show the world what true love looks like. Congratulations to all of the celebrity weddings that have already taken place this summer and blessings to those that have yet to happen.