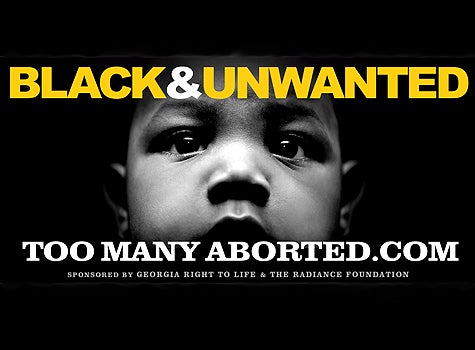 First it was the “Black Children are an Endangered Species” billboards a few months back, and now the Radiance Foundation is rolling out phase two of it’s “Too Many Aborted” project to highlight the disproportionate numbers of Black women having abortions in Georgia. The 60 new “Black and Unwanted” billboards featuring a Black child are “trying to draw attention not only to impact that abortion is having on the Black community but to point out there are other options,” Georgia Right to Life’s Catherine Davis told Savannah TV station, WSAV. According to the toomanyaborted.com the campaign is also “about exposing lies, especially those which claim that no one wants these beautiful Black children who are aborted (or those languishing in foster care).” The Radiance Group and Georgia Right to Life seems to think that the best way to create awareness about abortion is to inject race into the conversation, and perhaps they figure scrutinizing the reproductive rights of Black women is the best way to go about it? You tell us. Is this an effective way of getting their message across?