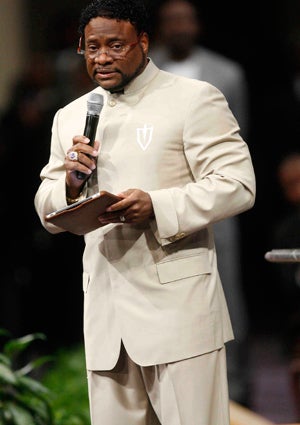 Bishop Eddie Long is looking to settle these sexual abuse allegations once and for all…out of court. The first hearing in the trial against Long, pastor of New Birth Missionary Baptist Church, was held in Atlanta on Friday, and during the proceedings Bishop Long denied ever having sexual relations with any of the four men who have made allegations against him. However, attorneys for Long as well as the four accusers say they are hoping to settle the case out of court. During the meeting, both Long and the four men named in the sexual misconduct case said they want to try to avoid trial, and would like to have a mediator resolve the allegations. The presiding judge Johnny Panos set a February date for mediation, and if the case is not settled in mediation, the first of possibly four separate trials may begin in July or August of 2011.

“The number one thing is we are ready to move forward in this case,” said B.J. Bernstein, the lawyer for the young men.