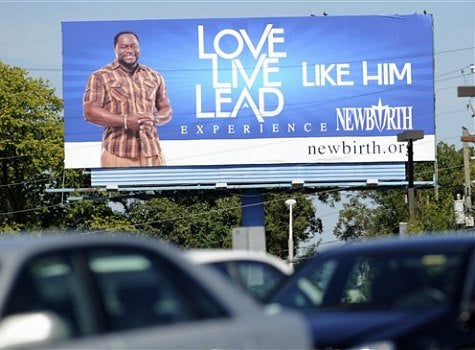 Talk about bad timing. A new highway billboard from Bishop Eddie Long’s New Birth Missionary Baptist Church features the pastor’s smiling face alongside the words “Love, Live, Lead Like Him.” The towering placard is getting the side-eye from more than a few Atlantans, who wonder who “him” is… If it’s meant to refer to Jesus Christ, who the original motto is about, then Bishop Long’s face shouldn’t be on there, said one resident to a local TV station. The motto was adopted back in March, months before a sex scandal rocked the megachurch. But putting it up in the midst of all the allegations is raising a few eyebrows. “Love, live and lead like he is? I can’t see it,” said one skeptical resident. Meanwhile, Bishop Long says he isn’t letting the allegations slow him down. He recently told his congregation that, if anything, the scandal has renewed his faith, and he refuses to be pulled into a “street fight.” What do you think, should the billboard be removed?
Loading the player...