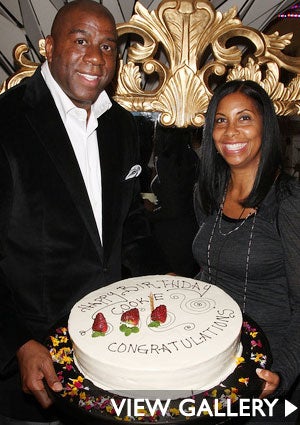 Today, Cookie Johnson celebrates her 51st birthday, but on Saturday night she got the surprise of her life when she stepped foot in The Conga Room in downtown Los Angeles. (Check out our exclusive images from the party!) “He really got me this time,” she said of her husband, Magic, who planned a surprise bash to celebrate her birthday and the success of her year-old jean line, CJ by Cookie Johnson. “I thought we were going to see Frankie Beverly!”  Little did she know at the time that Frankie Beverly and Maze, who were performing to a sold-out crowd at the nearby Nokia Theater, would take the stage at her party by night’s end. The guest list was steep–think Regina King and Malcolm-Jamal Warner, Boris Kodjoe, Nicole Ari Parker, Michael Strahan and Nicole Murphy, Salli Richardson-Whitfield and Dondre Whitfield, Holly Robinson-Peete and Rodney Peete, Samuel L. Jackson and LaTanya Richardson, Smokey Robinson, Natalie Cole, George Lopez, Lammon Rucker, LeVar Burton, Vanessa Bell Calloway, John Salley, Vanessa Williams and so many more.  The musical line-up was pretty impressive, too. To everybody’s surprise, Teena Marie, Cheryl Lynn, Jeffrey Osborne, Charlie Wilson, Eddie Levert and Ollie Woodson of The Temptations were in the house to perform and were accompanied by veteran musical director, Greg Phillinganes. Lynn even got Cookie, who was on the dance floor all night, to join her in singing that famous ad lib, “Soo hoo, soo hoo, soo hoo,” from her 80s classic, “Got to be Real.” By 1am, Maze was jamming and closed the show with a nine-song set. Everybody was on their feet. Before calling it a night, Cookie took the stage to express her thanks. “This night was really special for me,” she began, “and I want to take this time to appreciate my husband. I’ve known him for over 30 years and [though] it wasn’t an easy road, I wouldn’t have done it any different. It’s definitely been worth it.” Then, Magic chimed in. “Cookie, baby, you’re fine, you’re smart and you’re a hell of a wife and mother and such an incredible friend. I thank God for you.” As full, and fun, as the night was, the couple had to get home and gear up for an early flight on Sunday. Did we mention that Magic also planned a week-long jaunt to Hawaii for his family and his entire staff? Bottom line: Magic Johnson knows how to throw a party! Check out our EXCLUSIVE images from Cookie Johnson’s surprise birthday party!