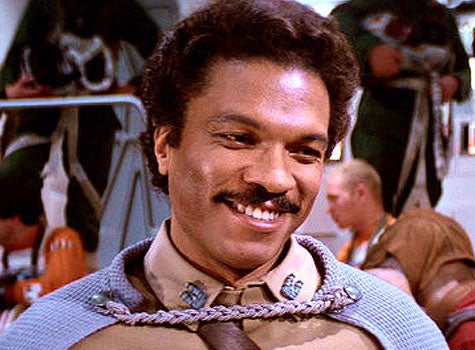 A gambler by trade and con-man at heart, Lando Calrissian would eventually come to be known for helping the Rebel Alliance overthrow the evil Galactic Empire, but it would be actor Billy Dee Williams whose portrayal of the character that would transform the fast talking part-time politician and full-time hustler from an ancillary character and into a fan favorite. As Calrissian, Williams made his Star Wars debut 30 years ago in the iconic–and arguably best–film in the series, The Empire Strikes Back. Fulfilling civic duty as the Baron Administrator of Cloud City, Calrissian double-crossed the Rebels and turned over Han Solo to bounty hunter Bobba Fett. Eventually he would redeem himself alongside the series’ protagonist Luke Skywalker in Return of the Jedi when he helps rescue Solo from the gelatinous Jabba the Hutt, and towards the end of the film, pilot the Millennium Falcon to help take down the second Death Star. As the only Black character in the original Star Wars trilogy, Williams’ rendering of Calrissian was as ubiquitous as it was unique. His smooth talking, subtle tactics and effortless grace allowed him to best not only the Rebels, but also the Empire, which was a feat that not even a small, green Jedi master could accomplish on his own. And if Darth Vader wasn’t stomping through Cloud City, in The Empire Strikes Back, he probably could have wooed Princess Leia away from Han Solo. Exuding a style that simultaneously straddled disco fever and inter-galactic dignitary, his uniform–which featured oversized collared shirts and a knee-length cape–echoed elements of contemporary 70’s style, however it was Williams’ mustache, perfectly coifed afro and slick delivery that pontificated his player-meets-politician ethos and made him a stand out character amongst a host of alien races in a long time ago, in a galaxy far, far away.