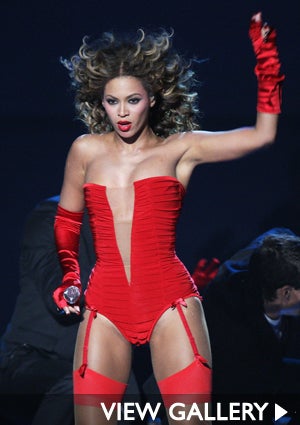 We had a “feeling” that last night’s Grammy nominations special would be big for Beyonce but we had no idea it would be this big. The multi-talented star led all nominees with 10 nominations, including Album Of The Year, Record Of The Year (“Halo”) and Song Of the Year (“Single Ladies (Put A Ring On It)”).
While Bey earned the most nods, the National Academy of Recording Arts and Sciences (NARAS) also honored Maxwell, Kanye West and hip-hop supergroup Black Eyed Peas with six nominations each. Other multiple nominees included Jay-Z and Lady Gaga, who both scored five nods.
“I am just beyond… I have been gone for eight years,” Maxwell said of his nominations, which include Song Of The Year (“Pretty Wings”), Best Male Pop Vocal and Best R&B Album. “I have been throwing out my trash, buying milk and living in basic obscurity, not looking exactly as I did when I first came into the game so to come back and make a record based on my own living experiences and not my desire to be No. 1 or in this business and to have this kind of reception–I feel like I have already won. I am grateful beyond words.”
The Grammys also recognized several urban music rookies who made their mark this year. Ledisi, Drake, Kid Cudi, Melanie Fiona, Jazmine Sullivan and Keri Hilson all earned their first Grammy nominations. “This has been a year of many dreams coming true for me,” said Hilson, who said she found out about her two nominations, which include Best New Artist, via text. “And this is just the creme de la creme of excitement thus far.” Hilson’s fellow first-time nominee Drake, who earned two nods–both in rap categories, may be the first artist to earn a nomination without even releasing a full album. “It’s very surreal. It all started out with some close friends of mine. We made a mixtape together–we’re all from Toronto–and it still hasn’t set in. It’s going to be an amazing ride.”
Last year, NARAS decided to announce the nominees via a televised special as opposed to its traditional press conference. In its second year, The Grammy Nominations Concert Live! — Countdown to Music’s Biggest Night” was hosted by LL Cool J and featured performances from the Black Eyed Peas, Maxwell and country group Sugarland, among others (check out our live blog recap here). Other artists nominated for Grammys this year include Kelly Rowland, Common, Mos Def, John Legend, Musiq Soulchild, Anthony Hamilton, Jamie Foxx and Trey Songz. For the complete nominations list, go to grammy.com.