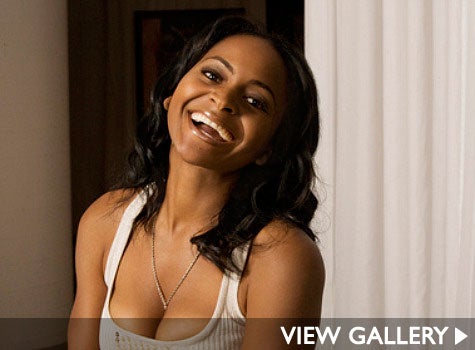 We’ve only seen one episode and already VH1’s “Basketball Wives” is chock full of drama, mostly surrounding Royce Reed, a dancer who has a two-year-old son with NBA power forward Dwight Howard. The petite 29-year-old single mom spoke to ESSENCE.com about being cast as a golddigger, and why she thinks she may have taken things a tad too far at Terrell Owens’ pool party. ESSENCE.com: What made you decide to go on “Basketball Wives?” ROYCE REED: I got on the show to get publicity for my company, Fantashique, an urban burlesque dance company. It was also to diffuse the stereotypes about me and other girls who date athletes in general. ESSENCE.com: What do you think are some misconceptions about you? REED: The biggest one is that I’m a golddigger because I dated an athlete. I’m far from that. I have a college degree in theater education and humanities, and I have my own business, which I’ve been running since before I had my child. When I dated a famous athlete it had nothing to do with money. I actually did fall in love and it turned into a four-year relationship. I’ve been an athlete my entire life so obviously I’m drawn to someone who is an athlete, whether they’re professional or not. ESSENCE.com: So, what was going through your mind as you were dancing at Terrell Owens’ pool party? REED: I was just having fun. I’m a free spirit and I don’t always think about what’s gonna happen after. I’m a dancer and I’m that girl that will dance anywhere. I was just trying to have a good time because I thought that’s what we were there for. I don’t regret doing it, although I do think I took it too far. ESSENCE.com: You think you took it too far? REED: [laughs] Yes, I do. I don’t think I should have necessarily been smacking the other girl’s butt like that. ESSENCE.com: Were you surprised by how people reacted when the video went viral? REED: I was shocked because I felt like if I was anybody else it wouldn’t have been what it turned into, ‘Oh this girl is a groupie, she’s crazy.’ ESSENCE.com: You mean if you were anyone else besides Braylon’s mother, whose father happens to be a certain NBA player? REED: Yes, if I were just anybody else it wouldn’t have been that serious. I see people dancing like that all the time and I don’t pass judgment on. I’m like, ‘that girl is having fun.’   ESSENCE.com: Did the intervention from the other “Basketball Wives” happen immediately or was it a few days later? REED: It was definitely a few days later and I was kinda taken aback by their reactions because the day after the pool party they were all for it. I think that once the backlash started coming they were like, ‘We just met this girl so why not throw her under the bus?’ I think after they got to know me they realized that’s just Royce, she’s silly like that. ESSENCE.com: But you did seem hurt during the intervention? REED: A lot of the time when I cry it’s because I don’t know what to say and I’m shocked. It wasn’t that I was hurt, I was wowed because the day before the girls were all for it and now all of a sudden I’m getting an intervention? ESSENCE.com: Do you understand why people would be shocked by the video? REED: To a certain extent, I definitely can see why people would be like, ‘Oh my God what will her son think when he gets older?’ And to that I say: I was not doing drugs, I wasn’t high or smoking out somewhere, and everybody does things that they don’t necessarily think they should have in the past. All of us will look back on moments of our lives and be like, ‘I can’t believe I did that.’ If you don’t have those type of stories then you have a boring life. ESSENCE.com: What’s been the best and worst part about being thrust into the public eye? REED: I definitely think my name being all over the media, good or bad, has kept me relevant, and it put me on the show. Where I want to take it is further in my career, whether it’s as an actress or a dancer. The worst is I have to worry about how things are gonna come across now. [laughs] I’ve realized that since the pool party. Catch Royce Reed and the other WAGS (Wives and Girlfriends), Sundays on VH1’s “Basketball Wives.” Read More: