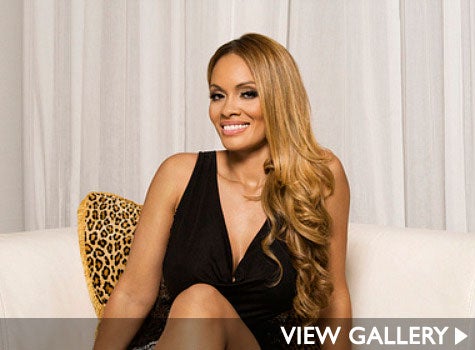 Of all the drama and name-calling on “Basketball Wives,” none can rival that of former NBA player Antoine Walker’s ex-fiancée, Evelyn Lozada. She recently enlisted the help of the FBI after her computer was hacked by an athlete’s wife whose name she won’t disclose. Said party is also accused of harassing Lozada and leaking nude photos of her on the Internet. The New York native and mom to a college-bound daughter spoke with ESSENCE.com about her relationship with Walker and why she doesn’t regret those racy nude photos. ESSENCE.com: Those nude photos of you are pretty racy. How were they leaked? EVELYN LOZADA: When I first started taping the show, I began getting harassing emails and texts from someone. At first, I thought it had to do with my ex-fiance (former NBA player, Antoine Walker) but then I knew he wasn’t that kind of person. Came to find out it was someone else and she was taunting me, basically saying, ‘I hope your show is successful because I’m going to make money off of you.” ESSENCE.com: And that’s why you spoke with the FBI on the show? Was it ever resolved? LOZADA: I can’t really speak on it because there’s still an investigation, but I can say it became bigger than those pictures. My daughter started getting harassing phone calls, and so did my business partner. ESSENCE.com: Surely you have an idea of who’s doing this. Do you know why? LOZADA: I can understand if maybe me and this person were good friends or maybe I tried to sleep with her husband, but I never had any connection with this woman and she’s targeting me? Why, because I left my relationship and opened up my own business? I just don’t know. ESSENCE.com: Did you have any regrets about the photos? LOZADA: At the end of the day, I took those pictures in my own home and they were for my man. If I didn’t have a daughter in high school, I wouldn’t care because I’m proud of my body. ESSENCE.com: Your ex-fiance Antoine Walker told you about the nude photos? How is your relationship now? LOZADA: I wouldn’t say we’re 100 percent but we are cordial. He was a little worried when we first started taping the show because he didn’t know what I was going to say. He realized that I wasn’t out to destroy his name so I’d say we’re cool. ESSENCE.com: There seems to be a lot of tension with Gloria and the other “wives” because she doesn’t think her relationship is like any of yours. LOZADA: Matt and Gloria have a beautiful family and I wish them the best, but when we were taping and telling our stories I felt like Gloria would look down on us like, “I never dealt with groupies.” It was difficult for us because more than one girl on the show knows someone that Matt has talked to. I hope and pray that their situation works because you never want to see a family broken, but he’s not that innocent. He is a great guy as far as their children and their family, though. ESSENCE.com: Like you say, a lot of athletes aren’t necessarily bad guys, so in your experience what makes infidelity such an issue? LOZADA: Speaking for myself I know I did everything that was expected of me: I made him meals at 2am, our sexual life was great, for example, but when women are throwing themselves at you, it’s hard. In my heart I know Antoine loved me to death but he strayed when he was on the road because it was easy and convenient. There’s no doubt in my mind that Matt loves Gloria, I just think temptation is too great, especially in a city like Miami. My relationship with this city is bittersweet. I got engaged in Miami but I also feel like I lost my fiance in Miami. Evelyn Lozada also own a shoe stores in Miami called Dulce.