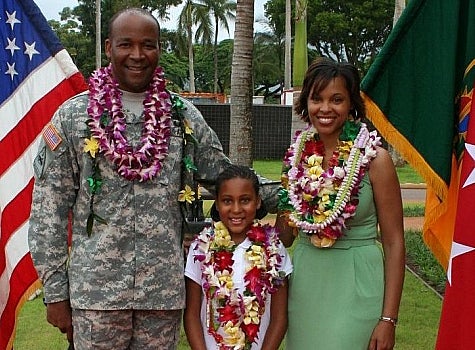 For years Towanna Freeman put her daughter, Jenesis, first. After being sideswiped by a divorce more than a decade ago, the 39-year-old management consultant and author (Purposeful Action: 7 Steps to Fulfillment) cut back on her hours–reducing her income by 50 percent, so she could focus on motherhood.

There were a few lean years, but disaster never struck, in fact things got better. Freeman revamped her career to suit her needs and even found time to pursue her passion, life-coaching. Despite all of her success, there was one things missing: a man. That all changed three years ago when she met Byron Freeman, a Colonel in the US Army. Freeman talks to ESSENCE.com about her transition from life as a single lady to being “the Mrs.”

ESSENCE.COM: You weren’t always a single mother. Tell us how your life changed when you split from your ex-husband?
TOWANNA FREEMAN: My daughter Jenesis was 3-years-old when I divorced my first husband. I had to make a lot of changes going from two incomes to one, but I was motivated because I knew I had a mouth to feed. I didn’t want my daughter to come in second. I was a project manager for the CIA but I downsized–everything. My shopping had to change, vacationing, even getting a new car, were now all luxuries that I couldn’t afford. My priority was making sure my daughter was in school and I could pay for aftercare.

ESSENCE.COM: After raising your daughter alone for 10 years you recently got married. How did you know he was the one for you?
FREEMAN: My husband had to woo two women, my daughter and myself. Once our relationship got serious–and I knew I could trust him–I let him spend alone time with Jenesis so they could bond. For example, we’d all go to the arcade, but I’d let them go off and play games while I watched from afar. I’d check in with her to see how he treated her when I wasn’t around. I believe it’s important for parents to listen to their kids– because they see things we don’t–and not just focus on what our mates say. Lastly, I made sure to talk to him about his views on parenting because I knew integrating families would require a lot of a man who didn’t have children.

ESSENCE.COM: Many women who’ve been single for a long time find it challenging to open their hearts and minds to co-existing, though they want a mate. Did you find it difficult?
FREEMAN: As a woman I’m naturally a nurturer, but after being single for so long I was used to bringing home the bacon and frying it. My challenge was allowing someone to take care of me. I had to learn to relax; I had to drop my defenses. It was like a changing of the guard. I had to acknowledge that my husband is capable. He’s a man whose decisions I can trust, so I had to learn how to stop asking for details. I don’t always need to be in control.

ESSENCE.COM: Money is a big issue for couples, especially since many Black women are also the primary breadwinners or may be entering into a relationship after already amassing significant savings. Are you and your spouse co-mingling funds?
FREEMAN: Yes, my husband has a successful career but I make more money then he does. Communication is important. All of our income is combined because we are working towards a common goal. I don’t taut the fact that I make more than him and he’s not competitive. We both respect our contributions to the household.

It’s important to get rid of that individualistic mentality the day you take your vows. Respect your mate. Most importantly, let the person who is naturally better at handling money manage your household’s finances. My last tip is don’t keep money secrets.If you have funds that you plan to keep aside, be upfront about it.