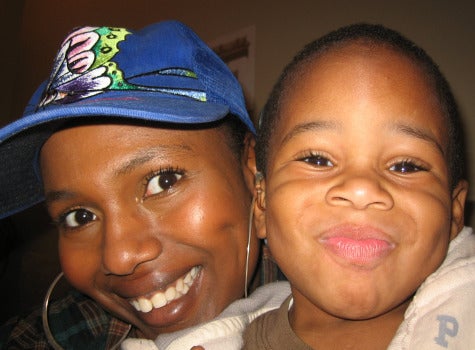 Back in 2006 I felt lucky. I had a loving husband and beautiful son, James Bond Jr. who napped through everything. While most mothers tiptoed around their infants, my baby’s slumber was undeterred by loud noises, such as the telephone ringing. Though my son failed the standard hearing tests newborns are given, he passed the sound wave test he received a few weeks later and doctors believed he was fine. I was not convinced. Instead of ignoring my concerns, I followed my instincts and conducted my own tests. I set up a string of “challenges” to determine what James could hear. I’d scream his name from another room. I’d clap my hands while he wasn’t looking. I’d give him commands up close to see what he understood. It became clear that my 12-month-old son could only decipher loud noises. After rounds of doctor visits, we took him to an ENT (Ear, Nose and Throat) specialist and James was given a sedated ABR, a test where he was put to sleep to determine how his brain responded to sound waves. At 15-months-old, he was diagnosed with bilateral profound hearing loss, which means he’s almost completely deaf in both ears. I’d love to say that I immediately put on my Superwoman cape, swooped down and saved the day, but really…not so much. I was hysterical. I laid in my bed for days, with two ears full of tears, wallowing in self-pity. Then my motherly love kicked into overdrive. On day three I became obsessed with knowing it all. That morning I decided to read the literature and watch the DVDs the specialist gave me and I heard a message that changed my outlook: You have choices. We selected Cochlear implants. This computerized device required a magnet, which sends coded electrical signals to the hearing nerves, be surgically implanted in James’ head, but there are stipulations. The candidate has to be profoundly deaf and the family has to commit to weekly sessions with various therapists and maintain all the equipment necessary for the procedure’s success. After doing some research I learned that the first five years of brain development are crucial, plus the gap in educational and speech delays were compounded as time progressed. My husband and I decided to go for it. My son received the implants a month before his second birthday. Though James was mentally on par with his peer group his auditory skills were comparable to a newborn, so he could not decipher sounds. In his mind my voice, the television or a doorbell ringing were all loud noises. My husband and I made James’ therapy our priority. Instead of returning to the workforce, teaching James became my full-time job.  Every activity, whether it’s playtime or bath time, had to be spoken. Every toy I bought had a purpose and we’d spend one hour a day doing specific activities that taught him about sounds.   Today James is 3 years old and his auditory skills are comparable to a 2-year-old. My goal is for him to be on par with his peer set by kindergarten. James attends a regular pre-school and receives therapy sessions four times a week. He is doing well–and everyone gets a kick out of having a real-life James Bond with a cool tech device around. In addition, I’m in school and ready to return to the workforce. I’m thankful that I reside in the Atlanta-area because two of the nation’s best programs, the Atlanta Speech School and the Auditory Verbal Center, are accessible. Sadly, program enrollment statistics show there’s a huge gap in enrollment and stigma in the Black community when it comes to disabilities. I was never ashamed of my son’s condition. I tell other parents don’t be afraid to admit your child has a problem to yourself. Plus, seeking assistance early prevents other complications, like poor academic performance. In addition, don’t be intimidated by time or costs; there are different levels of hearing loss and programs that will help with fees. James’ surgery cost about $100,000 and the technology and therapeutic sessions necessary to supplement the procedure have cost about $50,000… and counting. The result, my son’s hearing being restored to 100 percent, is priceless. For more Balancing Act stories, click here.