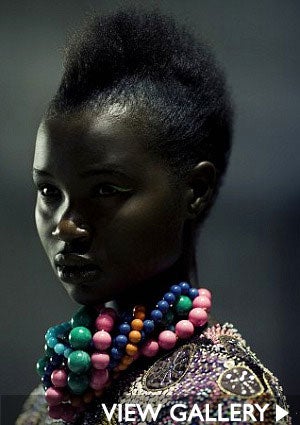 Ataui Deng may not be instantly recognizable yet, but take it from us, this Sudanese model, by way of San Antonio, Texas, will be a fashion force to reckon with in 2010. We first caught a glimpse of the 18-year-old walking the runways of Proenza Schouler and Zac Posen at New York Fashion Week S/S 09. With an angelic face, intense gaze and a 5′ 11″ frame, it’s not surprising that she would be walking the runways, but what is remarkable is how Ataui landed such prominent shows for her very first fashion week experience. “Oh my God, when I walked for Zac Posen I thought I can’t take another step because I might just pass out. The lights were all I could see,” recalls Ataui. Not that anyone could even tell. Ataui left a lasting impression on those who witnessed her runway turn. It was only a matter of time before the industry’s best photographers were booking her. Ataui has collaborated with the likes of Patrick Demarchelier for the Express campaign, Josh Olins for the Benetton campaign, Teen Vogue with both Arthur Elgort and Hans Feurer, i-D Magazine and V Magazine with Richard Burbridge. Ataui’s childhood dream of modeling came to fruition when she was discovered by Trump Management at a model expo in New York at the age of sixteen. Signing Ataui was a no-brainer for the agency. “You don’t really forget Ataui, she’s very memorable,” the agency’s president Corinne Nicolas has said. Ataui isn’t letting all the attention go to her head. Taking it all in stride and remaining professional at all times is how she navigates her new whirlwind, fabulous life. She would advise any inspiring model to take their work seriously and stay “humble ’cause any minute could be your time to shine, so be wise about your actions.” We’re delighted to see that she’s got a good head on her shoulders but that’s not to say Ataui isn’t just over-the-moon about the many perks that come with modeling: traveling the world and, of course, the clothes! While she does admit to not having been a die-hard fashion junkie before she began modeling, she has since developed an addiction. Ataui’s style leans toward lots of color and edgy designs. She names print masters Mara Hoffman and Custo Barcelona as faves and loves recent CFDA/Vogue Fashion Fund winner Sophie Theallet (for whom Ataui has walked the runway) beautiful dresses. With New York Fashion Week just around the corner, trust you’ll be seeing lots of Ataui on the runways. Until then, we’ve rounded up some of her fiercest shots to give you a crash course on this fresh new face destined to blow up.