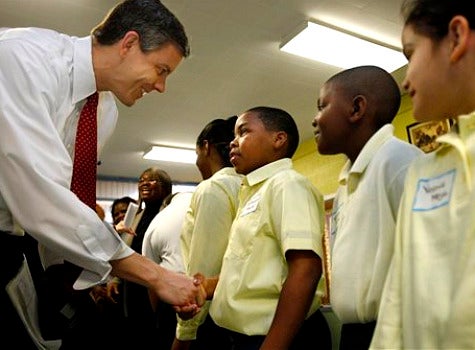 While President Obama zeroed in on healthcare last week, he’s made it a point to also prop up another issue. “Week after week, month after month, he keeps coming back to education,” said Education Secretary Arne Duncan to a reporter’s roundtable on Wednesday, citing a recent speech the President gave before the National Governor’s Association focused almost entirely on raising the nation’s educational standards. “He has flatlined all domestic spending outside of national affairs, except education. He is constantly pushing me. He’s got an absolute passion on this.” The Obama administration’s education agenda, as laid out in the 2011 federal budget and a higher education bill pending in the Senate, involves increased funding for early childhood education and community colleges, but also structural changes for a system that has fallen far behind those of other countries. “Some say our strategy is too ambitious,” Duncan said. “I would argue we have to be ambitious.” The administration has already launched Race to the Top, a grant program which makes $4.35 billion available to states if they agree to certain reform measures–including the controversial step of allowing teachers to be evaluated based on the performance of their students. The administration has also proposed a law that reduces student loan payments to 10 percent of a graduate’s monthly income, and erases their debt entirely if they work in public service for 10 years. “The President has drawn a line in the sand,” said Duncan. “He’s said that by 2020 we have to again lead the world in the percent of college graduates.” Here, Duncan elaborates on some of his ideas for what that’s going to take. On evaluating teachers based on student performance “We don’t look at absolute test scores. We look at growth and how much students are improving each year. Let me give you an example: You’re a fifth grade teacher, and I come to you at a second grade reading level, three years behind. If, after I leave you, I’m one grade level behind, under No Child Left Behind you would be labeled a failing teacher. I think not only are you not a failing teacher, you’re a phenomenal teacher. I gained two years of growth in one year’s instruction. So, we look at how much students are improving. “Another thing is, student test scores should only be a piece of evaluation, not the whole thing. There’s a whole series of other factors to look at–graduation rate, climate, whether the school is creating a culture where students can be successful. But what I’m finding is folks who say student achievement is irrelevant to teacher evaluation. That’s like saying that teachers don’t matter.” On why he thinks education is the civil rights issue of our time “If you look at the history of public education in our country, it’s supposed to be the great equalizer. The dividing line in our country, between the have and have-nots, is often around educational opportunity. You can come from real poverty, but if you have a great early childhood program, a great K to 12 education and you have access to go to college, you’ll do great. Yet, in far too many places in this country, educational opportunity is tied to race, neighborhood and zip code. There’s something wrong with that picture.” On supporting historically Black colleges and universities “We increased HBCU funding by $98 million [in the 2011 budget]. Only two percent of our country’s teachers are African-American males, and I worry about the disconnect between what our students around the country look like, and what our teachers and administrators look like. HBCUs produce almost half of the country’s African-American teachers, so if I want to increase my African-American male teacher pipeline, we need to keep HBCUs strong and make sure we’re producing that next generation of talent.” On charter schools “I’m not a fan of charters; I’m a fan of good charters. To have good charter schools, you need a high bar for entry. There should be a very rigorous process for allowing someone to open a charter school. Once you pick who you allow to educate, you need two things. First, we need to give them real autonomy. If they are innovators who think they can do better than what’s happened before, you’ve got to give them the room to implement their vision. But secondly, you have to hold them accountable for results. If you just give them autonomy but don’t hold them accountable, you perpetuate the status quo. When those three things happen, you often get great results for children.” Read more: