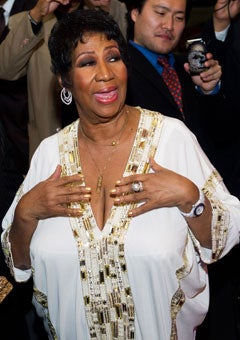 After delivering a health scare last December, Aretha Franklin is poised to take over the music world once again. On May 3rd she’s going to release her 38th studio album entitled “Aretha: A Woman Falling Out of Love.”

It’s been years since we’ve heard new music from the Queen of Soul, in fact it’s been eight years. She released “So Damn Happy” in 2003 and it peaked at 33 on the Billboard charts.

With all the recent hype surrounding Ms. Franklin she should make a much better debut this time around. The 12 track album, according to Eurweb, will only be available exclusively at Walmart. She did say months ago that May was going to be the month of her return. We look forward to seeing her live and in action next month.

Will you be getting a copy?