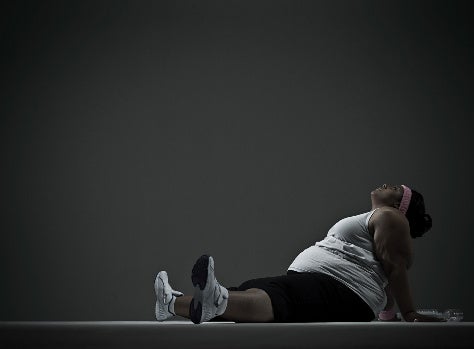 This week the conversation (or is it thunderous debate?) about weight is more heated than ever. First Lady Michelle Obama kicked off an anti-obesity initiative called “Let’s Move!” to get children exercising and to provide healthier meals at school, to begin with. Some have criticized the First Lady for what they see as too much of a focus on children’s weight and not their overall health. This past weekend movie director Kevin Smith caused a stir for accusing Southwest Airlines of throwing him off a plane because he was “too fat.” Smith has since taken to Twitter and the airwaves calling for a change in airline policies with regards to heavier passengers. And as New York Fashion Week rolls on, the fashion world’s promises (and campaigns) to be more accepting of “meatier” girls are under fire once again as former supermodel Coco Rocha accuses bookers of not giving her jobs because she’s too fat. She’s a size 4. The same is being said of Australian model Gemma Ward, who used to be the hottest girl in the game before she gained 30 pounds. And now she has not worked a show or a campaign for two years. Yet it’s not enough for us to think that America’s obesity and weight obsession is limited to what many deem as the “superficial” world of fashion. Nor is it only affecting White communities. Though Black women are historically thought to have a positive body image, new studies, such as one conducted on girls in schools in Washington D.C., California and Ohio, found that Black girls were 50% more likely to be bulimic than their White counterparts. For this sector of African American girls, the drive to be thinner is most often influenced by White popular culture, say researchers. On the other end of the spectrum, four out of five African American women is overweight or obese, according to the U.S. Department of Health and Human Services. Oscar-nominated actress Gabourey Sidibe has openly talked about her battles with weight and revealed that she’s been dieting since she was six year’s old. We’ve watched as countless celebs, like Gabby, battled weight-gain, sometimes privately, too often, publicly. We jeer and post scathing comments on blogs when they get a little chunky (think Janet Jackson). And we cheer when they pose on the cover of a tabloid with their new bikini body (Think Sherri Shepherd). But what does it say about us?
Loading the player...