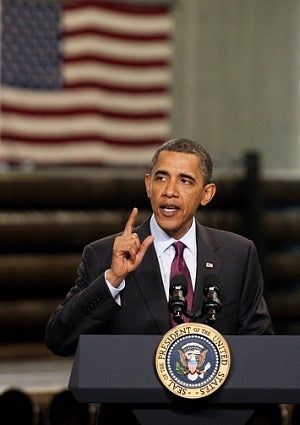 There used to be a time when you joined a Facebook group to talk about your favorite TV show, or even a favorite author. These days, under the banner of “free speech,” there’s a Facebook page for just about anything, including promoting the death of President Obama. One group in question has over one million “fans” and calls itself “praying” for the President’s death. The page features posts linking President Obama to Hitler. There are even images of the president sporting an Afro next to a bucket of fried chicken and watermelon. Free speech is how supporters defend the group. Even Facebook has shied away from taking it down, despite it’s own terms and conditions, which say that no one is allowed to “post content that: is hateful, threatening, or pornographic; incites violence; or contains nudity or graphic or gratuitous violence.”   Add to that, the Tea Party movement and polarizing figures like Sarah Palin, and the anti-Obama Facebook page becomes one of thousands of such groups that routinely express their vehement hatred for the president through some very public forums. Recently an Alabama geometry teacher was questioned by the Secret Service after using the hypothetical assassination of President Obama to teach students about angles. “He was talking about angles and said, ‘If you’re in this building, you would need to take this angle to shoot the president,” a student told a local paper. Are these both examples of crossing the line from free speech to something greater like inciting violence? We’re already living in a climate that is hostile towards an African-American president and groups that in any way — even through so-called prayer — incite hatred only add to the discontent that’s already brewing. What do think? Is “free speech” being taken too far?