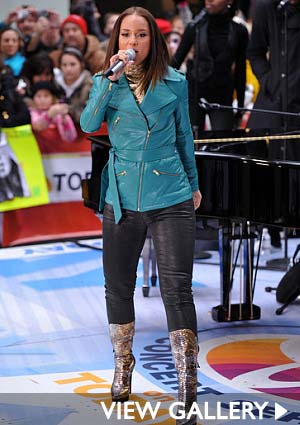 During a “Today” show interview and concert last week Alicia Keys said that she would make a big announcement that would change five people’s lives on at her World AIDS Day benefit performance tonight at NYC’s Nokia Theatre in Times Square. Well, the news has come a little early. The singer, songwriter and activist will launch a contest to bring five people on a trip to Africa with her.
Keys was so touched by her first trip to the continent that she founded her non-profit organization Keep A Child Alive, which benefits children and families affected by HIV and AIDS.
According to AP, fans can enter the contest through the foundation’s Web site, www.keepachildalive.org or they can send in a text to the organization. The text messages cost $5 each, but the money will go to Keep a Child Alive.