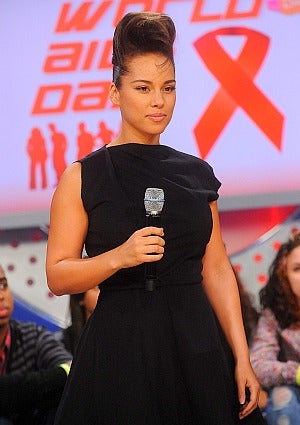 On World AIDS Day — December 1 — Alicia Keys and her industry pals committed “digital deaths” as part of a campaign to raise $1 million for her “Keep A Child Alive” foundation. Three days later and Keys, Usher, Lady Gaga, Serena Williams Kim Kardashian, Justin Timberlake and other stars are still not tweeting, as they haven’t reached their goal yet. That means Usher, Alicia Keys and Lady Gaga were unable to tweet about their recent Grammy nominations. Russell Simmons wrote an op-ed piece for the Huffington Post yesterday saying, “I will not let Alicia Keys DIE in vain.” Simmons submitted an obituary-styled piece on Alicia Keys, writing, “Ladies and gentlemen, we gather here today, because we have ‘lost’ an angel.” “Your current awareness and fundraising campaign is brilliant. It reminds us all how fragile life is, and at any moment, it can be taken from us,” Simmons praised Keys. “We will reach the goal of $1 million dollars. We will not let you and your dear friends die in vain.” To bring Alicia Keys, Usher and others back to life text “ALICIA” to 90999 and reply “YES” to give $10 to KeepAChildAlive.