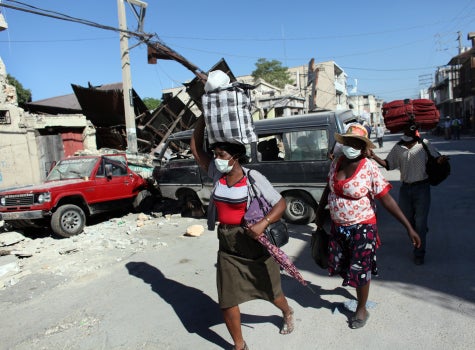 It’s been a week since the 7.0 magnitude earth shattering quake hit Haiti. It’s been estimated that 200,000 people on the island were killed, 80,000 buried in mass graves, many are still buried under the rubble and the lack of medical care is killing off those injured. The very first images of the aftermath of this devastating earthquake I saw on CNN left me speechless. It looked as if an atomic bomb had been dropped on the island with the intent of wiping it off the map. Panic immediately took hold of my family. Like every other Haitian abroad here in the States, Paris, and South America, we were struggling to reach someone, anyone, in Haiti but the lines were dead, texts were not going through, and emails were not being returned. The lack of communication was unbearable and led to flashing images of injured friends and family running through my mind repeatedly. No news was agonizing, but I also dreaded the moment when someone on the other end of the line in Haiti would pick up and confirm our worst fears. Although, seeing the pristine and sturdy National Palace, perhaps the only structure in the country in a perpetual safe bubble protecting those inside from the socials ills and natural disasters suffocating the rest of country, with its entire roof caved in was all we needed to fully grasp the gravity of what had occurred. News about the safety and whereabouts of my family and close friends came in piecemeal from relatives and friends living in the U.S. who managed to get through to Haiti before we did and from the rushed calls from survivors of the quake in Haiti. The information came in slowly: the home where I grew up in Port-au-Prince as a kid and where my uncles and cousins lived in up until last Tuesday is completely destroyed. Everyone made it out except for one family member who was pinned under the rubble for hours before being freed. They were now living outside in the courtyard next to the massive pile of cement that was once their home. Our home in Petion Ville miraculously did not suffer any damage and everyone inside was safe. Word of deceased close friends and family, who weren’t so fortunate, continue to trickle in. As soon as email access improved, detailed accounts of what was taking place in Haiti were coming in from family members. They spoke of destruction, government buildings, the pungent stench of death, hunger, sadness and the agony of watching our beloved country fall apart. The destruction left behind by the earthquake is a metaphor for what this island has suffered over the centuries. It’s Haiti weeping for attention and love revealed to everyone around the world and the way in which this beautiful country and its people have been grossly abandoned by the West. This isn’t just a natural disaster. The death toll climbing has as much to do with the plates on which Haiti lies on, as it does with the state of affairs in Haiti before this tragedy. The last time I was in Haiti was three months ago to bury my mother. Ironically, if she were still alive both my parents would have been in Haiti at the time of the quake. My retired parents would often spend the winter months in Haiti. This year, my dad decided to stay in New York. I can’t help but believe my mom passed away when she did for a reason. Not only because it spared them from living through this disaster, but because my mother, who selflessly loved Haiti, would have been so heartbroken. Growing up, it was the norm for my mother to break out in tears at any moment, appropriate or not, about Haiti. She loved Haiti like a mother loves a child and she constantly worried about her. From donating her time as medical professional, sending medical supplies, feeding orphans to paying for the education of others, Haiti was everything to her. Mourning this disaster in essence is akin to reliving my mom’s death all over again. She and Haiti have been intrinsically linked all my life, separating the two is pretty much impossible. As the days go by the pain of watching Haiti struggle to hold on hasn’t lessened. There’s always the fear that no matter how strong my Haitian people are–they’ve lived through being enslaved by the French, chasing Napoleon off the island to become the first Black republic in the world in 1804, paying a heavy monetary debt to the French for their freedom, enduring decades of political unrest, dictatorship, being occupied by the U.S. and a self-serving Haitian government–this blow is just too much to overcome. Then I witness a scene like the one where women, children and men were singing and praying to the heavens as they marched through the streets of Port-au-Prince littered with corpses and I’m reminded of the legacy of resiliency in Haiti. The emergency effort may only be starting and, chances are, will go on for some time, it’s imperative that countries in the West assist the Haitians in rebuilding Haiti. I’m hoping the countries on the ground now taking part in the relief mission won’t turn their backs on the Haitians, who were so blessed to live through this horror, once this story becomes old news. Get the latest updates on the situation in Haiti here. Read a first hand account of the aftermath of the earthquake in Haiti. Watch video to footage of the aftermath of the 7.0 quake.