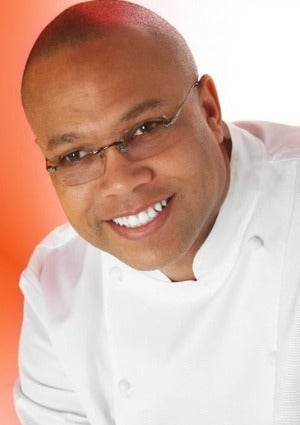 “As an African American chef, I understand the enormous role that food has had in shaping black culture and history. So when Tavis approached me about working on this project, I immediately said yes.”
-Chef Jeff Henderson

Not only is Chef Jeff Henderson an award winning chef, New York Times best-selling author, reality star and consultant but he is also on a quest to use his trials and tribulations to promote change and help others to realize their full potential.

Although Cheff Jeff did distribute drugs, Chef Jeff is waging war against another type of poison: unhealthy food and bad eating habits in our communities. As part of Black History Month and in conjunction with media mogul Tavis Smiley, the chef is co-editor of the “America I AM Pass It Down Cookbook,” which is part of the America I AM: the African American Imprint available in stores now.

ESSENCE.com sat down with the busy chef to talk about food, food and more food!

ESSENCE.com: First of all, we congratulate you here at ESSENCE.com on all your successes, including your most recent which is co-editing, along with Ramin Ganeshram, America I AM Pass It Down Cookbook which has hit stores just in time for Black History Month.
CHEF JEFF:Thank you very much! It was indeed an honor and privilege to be a part of such an incredible exhibit. It’s a carefully selected collection of recipes, pictures, essays and personal reflections for people all over the country. It is about sharing those treasures, those culinary jewels that have been passed down from generation to generation and now the world will have the opportunity to partake as well. Food is the fabric that has and will continue to hold communities worldwide together.

ESSENCE.com: What is your definition of healthy eating?
CHEF JEFF: Healthy eating is based on a number of components and when combined together they create a healthy lifestyle. Eating seasonal foods, eating locally grown and eating sustainable inhibits you from using less butter, less fat and less salt to flavor your meals. Your mind has to connect with your body which in turn must connect with your soul to obtain and remain dedicated to this lifestyle.

ESSENCE.com: What tips do you have for those families trying to balance eating healthy with the harsh reality of affording these types of foods?
CHEF JEFF: The first step is recognizing and categorizing our priorities. If you’re healthy then your family will be healthy especially your kids. They learn by example and education of every kind starts first in the home. On your off days, sit down with a pen and pad and make a list of your weekly meals. Figure out your budget and what makes sense according to your family needs. You don’t ever have to spend a ton of money on food. Ever! If someone tells you otherwise don’t listen to them. There are always ways to cut corners which include sales, clipping coupons and buying in bulk. Once this is decided prepare your meals during the weekend in between soccer, scout meetings and basketball practices. I believe in stews, braised foods, beef, chicken and rice, which all can be prepared in a slow cooker while you run your errands. The magic of preparing such meals are their lasting power. Preparing two of these suggested dishes can last for a few days; just prepare additional side dishes and you are all set until the weekend where you will repeat the process once again. Aside from healthy preparation are healthy portion sides. In our community our obesity stems from portion size. You don’t have to always fill up your plate or consume multiple servings in one sitting. Eat until you are full not until you’re stuffed. There is a major difference between the two. Restraint is the key. Once your mind understands this philosophy then your body, soul and spirit will soon follow.

ESSENCE.com: Why is healthy food such a mission of yours?
CHEF JEFF: I am such an advocate of healthy food as well as healthy eating because I want to take a role in not only cooking healthy but ensuring a future. Obesity, high blood pressure and diabetes are killing our community. We put any and everything in our bodies. We are killing ourselves.

ESSENCE.com: How has food opened a door of opportunities in spite of your previous misfortune?
CHEF JEFF: A few years ago, I went to prison for dealing drugs. While incarcerated, I worked in the mess hall. At that moment, the kitchen became my refuge. I discovered a love of cooking because it was one of the first times that I had ever been praised for doing something positive. Thought I had no formal culinary training, through persistence, I was able to carve out a niche for myself. From my New York Times bestselling memoir Cooked: From the Streets to the Stove, From Cocaine to Foie Gras to the host of my own reality TV series and going on to become the first African American Chef de Cuisine at Caesar’s Palace in la Vegas and executive chef at Café Bellagio, my circumstance never became my destiny!