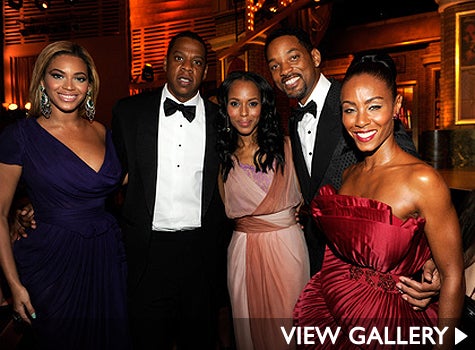 It was a virtual “black-out” Sunday on the Great White Way as the Tony Awards swept into New York City. Nabbing two of Broadway’s biggest honors were African-American actors Denzel Washington and Viola Davis, who won best leading actor and actress for their unforgettable turns in the Broadway revival of August Wilson’s “Fences.” It was Washington’s first Tony Award win and Davis’ fourth — she already had two statuettes for another Wilson play, “King Hedley II,” and one for 2004’s “Intimate Apparel.” On the red carpet earlier in the night Davis — who’ll next appear in the Tom Cruise action-comedy “Knight and Day” and Julia Roberts’ drama “Eat Pray Love” — said she’s just happy to finally be part of a bonafide Broadway hit. “This is a wonderful night for all of us,” she says of the cast, which also includes Mykelti Williamson, Russell Hornsby and Stephen McKinley Henderson. “To be honored for bringing the great August Wilson’s play to Broadway is a dream. And it doesn’t hurt that it’s a hit! Ten nominations … incredible!” But “Fences” — which wound up winning Best Revival — wasn’t the only Black play to be honored by the theater community this year. Also touted was “Fela,” the feisty, feet-stomping musical about Afrobeat pioneer Fela Kuti, produced by Jay-Z and Will and Jada Pinkett Smith.  It snagged two awards, including “Best Choreography” under the direction of dance legend Bill T. Jones. “Memphis,” an interracial love story set in 1950s Tennessee,” wound up becoming one of the night’s biggest winners, taking home four awards. Star Montego Glover — a former Walt Disney World performer — said she felt “honored to just be nominated” stacked up against so many other great actresses, including Catherine Zeta-Jones, who won for Best Leading Actress in a Musical. Still, “Race” star David Alan Grier, who was also nominated but did not win for best performance by a featured actor in a play, said there really were no losers — at least not for Black theatergoers. “For the first time, it’s not just about ‘Race,’ it’s about ‘Fences,’ ‘ Fela,’  ‘Memphis’ …  all different kinds of plays on Broadway that tell of the Black experience. We’re moving down a new road of enlightenment [in Black theater],” he said. “There used to be just one actor, one play; one woman, one voice; so to get beyond that is truly exciting.”
Loading the player...