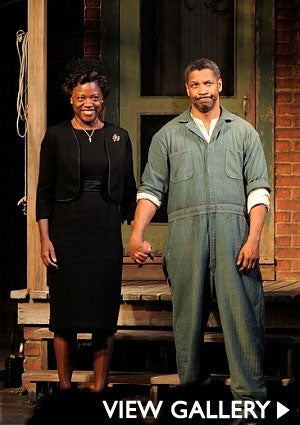 Like the Oscars, the morning that the Tony Award nominations are announced is one of the most anticipated days on Broadway. And today is an especially exciting one for African American actors on the Great White Way. Among those who received a Tony nod are Denzel Washington (Best Actor in a Play) and Viola Davis (Best Actress in a Play) for “Fences,” which led with 10 nominations for non-musical show. Actor David Alan Grier was nominated for “Best Performance by a Featured Actor” for “Race” and Montego Glover (Best Actress in a musical) for “Memphis.” But most notable is the musical “Fela!” which earned a whopping 11 nominations. “Fela!,” together with “Le Cage aux Folles,” have broken the record for most nominations for a musical on Broadway. Jay-Z, Alicia Keys, Will Smith and Jada Pinkett-Smith were included on the list of producers nominated for the musical. Now that’s something to sing about. And, in case you feel like you’re not seeing enough Black talent in Hollywood, Broadway’s calling.