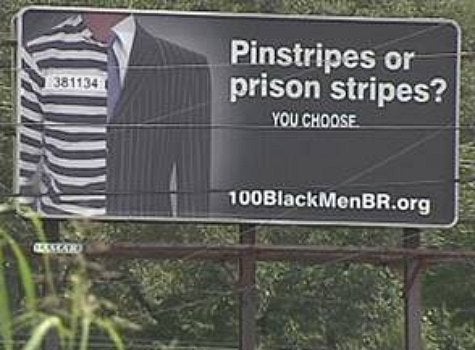 100 Black Men of America, a non-profit organization that promotes improvement of African-American communities, is using a new billboard to draw attention to the high number of young Black males in prison. The sign features the image of a man’s torso, dressed on his right side in a prison jersey and on his left side in a suit and tie. The caption for the billboard reads, “Pinstripes or prison stripes? You choose.” Partnering with Project Exile, 100 Black Men hopes to post more billboards around the country in an effort to impact youth during a critical time in their development, according to Clutch Mag.