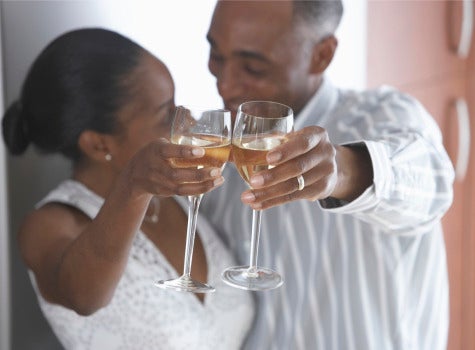 New Year’s Eve can often be a bit of a letdown. You and your man get all dressed up, party at a club ’til your feet hurt and someone gets into a fight, you lose each other right when it turns midnight and someone spills champagne on your expensive party dress. We’re just saying, it might be better if you and your dude stayed home this New Year’s Eve and have your own party. We’re counting down from ten, to the number one reason why you should consider staying home with your sweetheart on New Year’s Eve… 10. You’ll save a lot of money New Year’s Eve is to nightclubs what Black Friday is for retailers. Why spend $200 on a party dress, $125 on a ticket to the party, $300 on a bottle, when you can have a priceless night at home with your honey and save a ton of cash? 9. No need to designate a driver We know, no guy likes a lush, but you will feel more free to get tipsy at home, knowing you or your guy don’t need to get behind a wheel at the end of the night. 8. No other girls for your man to stare at It’s New Year’s Eve. You won’t be the only girl at the party looking fly. And while he loves you very much, your man may admire another lady or two. You can have his undivided attention if you stay home. 7. No other dudes for you to stare at The same goes for you. There’ll be lots of dudes dressed to kill at the club on New Year’s Eve. You can show your man that you’re all about him if you stay home. 6. You’re guaranteed kisses when the clock strikes 12 When midnight hits, get ready for some lip smacking. Your man will be right next to you when it turns 2011 instead of at the bar settling his tab or in the long bathroom line. 5. You can set the mood and pick the soundtrack It’s your party. You can make it exactly how you want it to be. Buy candles, rose petals or confetti and listen to the music that moves you, without any worry that the DJ will change the tune mid-song. 4. No need to feel bad about PDA You won’t have a bunch of people telling you “get a room!” if things get a little too steamy at the New Year’s Eve party. 3. The club doesn’t have a hot tub How about ringing in the New Year with bubbly and a warm bath with your beau? Beat that. 2. No dress code = no clothes You really don’t have to wear anything on New Year’s Eve. Sure it would be nice if you slipped into some new lingerie and a pair of hot pumps, but you and your guy could just ring in the New Year in the buff, if you choose to. 1. You can go straight to the after-party Your party is the after-party. And just like at a nightclub after party, anything goes. But really, anything goes. Have a Happy New Year, ladies… at home!