By Donna M. Owens · Updated October 23, 2020
Denea Joseph was 7 years old when she said good-bye to her parents, siblings and homeland of Belize, bound for the United States of America. The little girl with copper skin and dark, soulful eyes carried few possessions. Accompanied by an aunt during that 2002 journey from Central America, she settled in with her grandmother in California and embarked on a new life. Yet there was a secret, one that involved her immigration status. “For 16 years I’ve called America home,” says Joseph, now 24 and a graduate of UCLA. “It’s where I grew up, shared classrooms with American children, and gave back through civic engagement, advocacy and organizing. The only thing I lack is a piece of paper that would allow me to contribute and live according to my full potential.” Joseph is among some 700,000 Dreamers—who are beneficiaries of the Deferred Action for Childhood Arrivals program, or DACA—in the U.S. They are called Dreamers based on the DREAM (Development, Relief and Education for Alien Minors) Act, a proposal first introduced in Congress in 2001 to offer legal status to the undocumented who were brought to the U.S. as children, with the requirement that they attend college, work or join the military. The repeated defeat of the DREAM Act in Congress prompted President Barack Obama to enact DACA through an executive order in June 2012. DACA enables undocumented immigrants in good legal standing who arrived in America before their sixteenth birthday to receive work permits and exemption from deportation for two years; the time period is renewable so long as an individual’s conduct remains exemplary.

“As the daughter of Nigerian immigrants and someone who’s worked in immigrant communities for more than a decade, I’ve never been more concerned about the safety and dignity of our communities,” says Opal Tometi.

For DACA recipients, whose average age is 24 years old, the program began to unravel when Donald Trump, then a candidate for president, vowed to reverse the executive order. Then, in September 2017, U.S. Attorney General Jeff Sessions announced the program would be phased out. Civil liberties organizations such as the National Immigration Law Center, the NAACP Legal Defense Fund and the ACLU challenged the proposed shutdown of DACA in court, even as Texas and at least nine other states sued to halt the program. Round one went to the Dreamers. In August 2018 a federal judge in Washington, D.C., overturned the decision to end DACA, saying the government’s case was “inadequately explained.” “For the sake of the young people impacted by this program, who productively contribute to our country, we hope that the U.S. Court of Appeals for the D.C. Circuit will affirm the district court’s ruling in this case,” says Khyla D. Craine, the NAACP’s assistant general counsel. But Attorney General Sessions derided the ruling, and the Trump Administration is now weighing an appeal. Repealing DACA is just one of a series of immigration policies under Trump’s presidency that have sparked fear and outrage. Others include a ban on travel from several Muslim-majority countries and a “zero tolerance” ruling that resulted in some 2,300 children being forcibly separated from parents seeking asylum at the southern U.S. border. The children, some still in diapers, were detained in wire-link cages inside warehouses, in tents hastily erected on military bases, or at private agencies as far away as New York City and -Seattle. Black mothers from Honduras and the Democratic Republic of the Congo were among those who recounted the agony of seeing their children snatched away. The vehement public outcry led the President to sign Executive Order 13841 to end the separation policy in June. “It’s about keeping families together, while at the same time, being sure that we have a very powerful, very strong border,” Trump said in a White House statement. But when a judge ordered the families to be reunited, it quickly became clear that the customs officials had no records or systems in place to match the children with their parents, many of whom had already been deported without their offspring. The ACLU and immigrant advocacy groups (including UndocuBlack Network, African Communities Together, Haitian Bridge Alliance, Inc., United We Dream and the Black Immigrant Collective), as well as several civil rights and faith leaders, tried to stand in the gap. Across the country appalled citizens rallied, marched and organized to help in whatever ways they could. Representative Maxine Waters urged folks to call out Trump Administration officials, while Congolese immigrant Therese Patricia Okoumou scaled the Statue of Liberty on July 4 in protest. 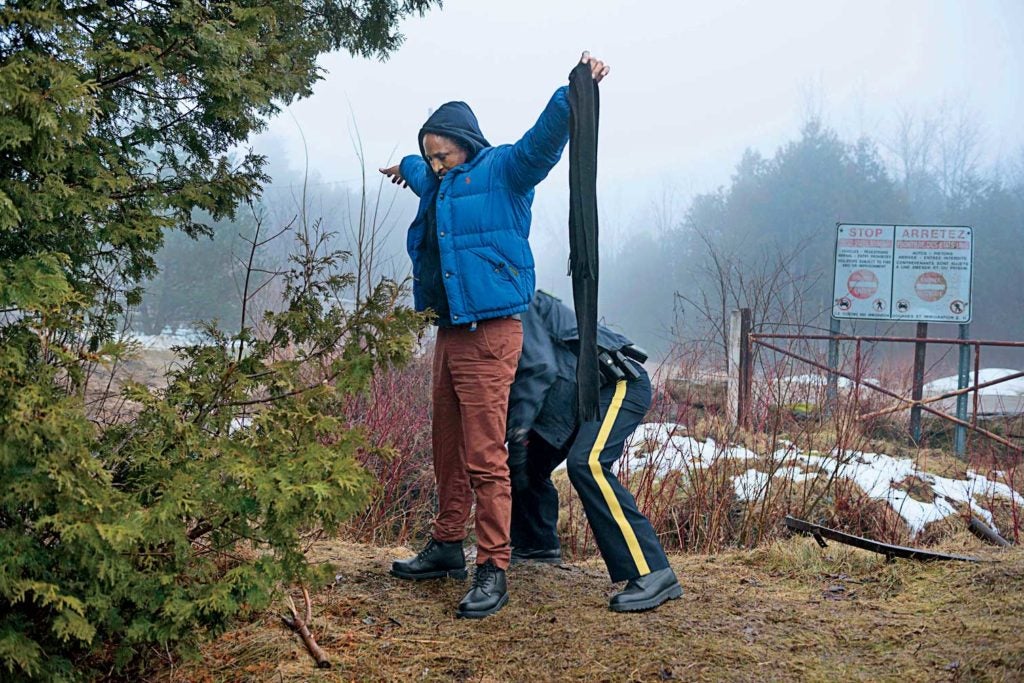 “As the daughter of Nigerian immigrants and someone who’s worked in immigrant communities for more than a decade, I’ve never been more concerned about the safety and dignity of our communities,” says Opal Tometi, a cofounder of Black Lives Matter and now executive director of the Black Alliance for Just Immigration. Noting that the commander in chief had referred to Haiti and African nations as “s–thole countries,” she adds, “This administration has no respect for our humanity.” Former U.S. ambassador to Senegal Harriet L. Elam-Thomas agrees. Having spent 42 years in the State Department’s Foreign Service with postings around the globe, she described the treatment of families seeking asylum under Trump as inhumane. “My heart is heavy, my soul is troubled and my faith in my country is being tested each and every day,” she says. “Where is our conscience? Where is our sense of justice? Where are our morals? Where are we?” As the country grapples with immigration issues on multiple fronts, the Congressional Black Caucus and African-American women lawmakers are pushing to ensure that the interests of Black immigrants are not ignored. Congresswoman Sheila Jackson Lee (D-TX) has made several trips to the southern border to investigate the living conditions of warehoused children. Together with colleagues in the House of Representatives, she cosponsored the Keep Families Together Act, aimed at prohibiting the federal government from separating kids from their parents except in extraordinary circumstances. “Equitable and just treatment for all people is a pillar of American democracy,” she asserts, “and it is a tenet that we need to strive to uphold with every recourse we possess.” Senator Kamala Harris (D-CA)—the daughter of  Indian and Jamaican immigrants—has also been outspoken about current immigration policies. She and other Democrats personally met with Dreamers like Denea Joseph, inviting Joseph to attend last January’s State of the Union Address. And after touring a detention facility, Harris introduced legislation that includes the DONE (Detention Oversight Not Expansion) Act to stop the expansion of Immigration and Customs Enforcement detention spaces and ensure better oversight of conditions in existing centers. She also initiated the Reunite Every Unaccompanied Newborn Infant, Toddler and Other Children Expeditiously (REUNITE) Act to guarantee that hundreds of broken families can ultimately be reunified. “Government should be in the business of keeping families together, not tearing them apart,” Harris notes. 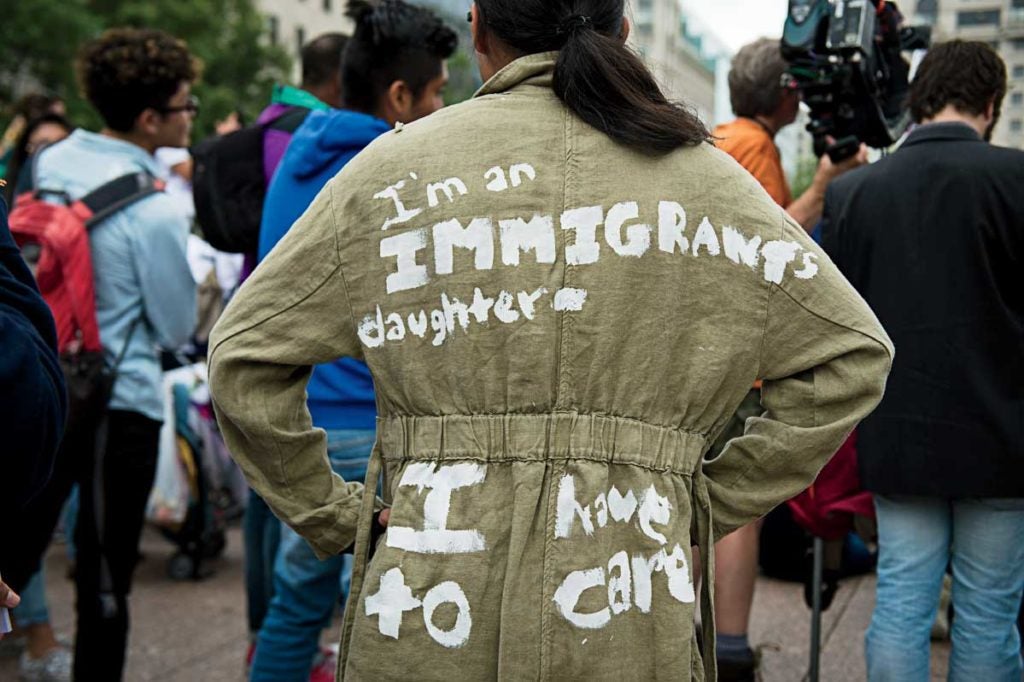 In support of such actions, Congresswoman Yvette Clarke (D-NY) cochairs the Congressional Black Caucus Task Force on Immigration and has introduced more than a dozen immigration bills. She is joined in her efforts by Congresswoman Karen Bass (D-CA), the ranking member of the House Subcommittee on Africa. “When we look at immigration, it’s usually through a lens of the newly arrived Latino population,” says Clarke, whose parents came here from Jamaica. “But there is a much more expansive group of individuals within our borders who are relatively new as well. They’re a huge population of African descent coming from throughout the diaspora, whether it’s Continental Africa, South and Central America or the  Caribbean.” To be clear, the Migration Policy Institute reports that the bulk of America’s nearly 44 million immigrants are in the country legally. Still, there are an estimated 11.5 million undocumented immigrants here, with more than 575,000 Blacks among that number, according to The State of Black Immigrants, a 2016 report from the New York University School of Law Immigrant Rights Clinic and the Black Alliance for Just Immigration. Nelima Sitati Munene, 43, a Kenyan immigrant advocate in Minnesota, points out that Black people who move to the States face unique challenges: They’re more often racially profiled and, if undocumented, are subject to longer detention and increased deportation. “Women, being the main caretakers in our community, are shouldering an unprecedented burden,” observes the wife and mother of three. Fortunately, public opinion is evolving, in part because of the troubling fallout of recent policies. A June 2018 survey by the Pew Research Center found that 74 percent of Americans favor granting legal status to immigrants who entered illegally as children, while 60 percent oppose the wall Trump wants to build along the U.S.–Mexico border, which he has claimed will help eradicate criminal elements, drugs and terrorism. The survey also revealed that a majority of Americans are unaware that most immigrants in the U.S. are here legally. Even so, most poll respondents did not believe that undocumented people take jobs that citizens want or that they are more likely to commit serious crimes. Even some conservatives are trying to rebalance the scales of fairness when it comes to immigrant rights. Mia Love (R-UT), the first Black Republican woman elected to Congress, is the daughter of Haitian immigrants. This year she cosponsored the Uniting and Securing America Act, which would provide protections for DACA recipients. She also worked on another key matter—Temporary Protected Status—to allow foreign nationals from countries like Haiti and Somalia, which are experiencing armed conflict, natural disaster or other extraordinary circumstances, to stay in the U.S. if conditions back home prevent their safe return. When asked about whether she believes immigration was being handled well by her own GOP party or Democrats, Love says she hopes for more balance and less demonizing. “Generally, I don’t think any collective political organizations are handling immigration particularly well,” she says. “Americans are presented with too many false choices, and immigration is too often used as a wedge issue.” 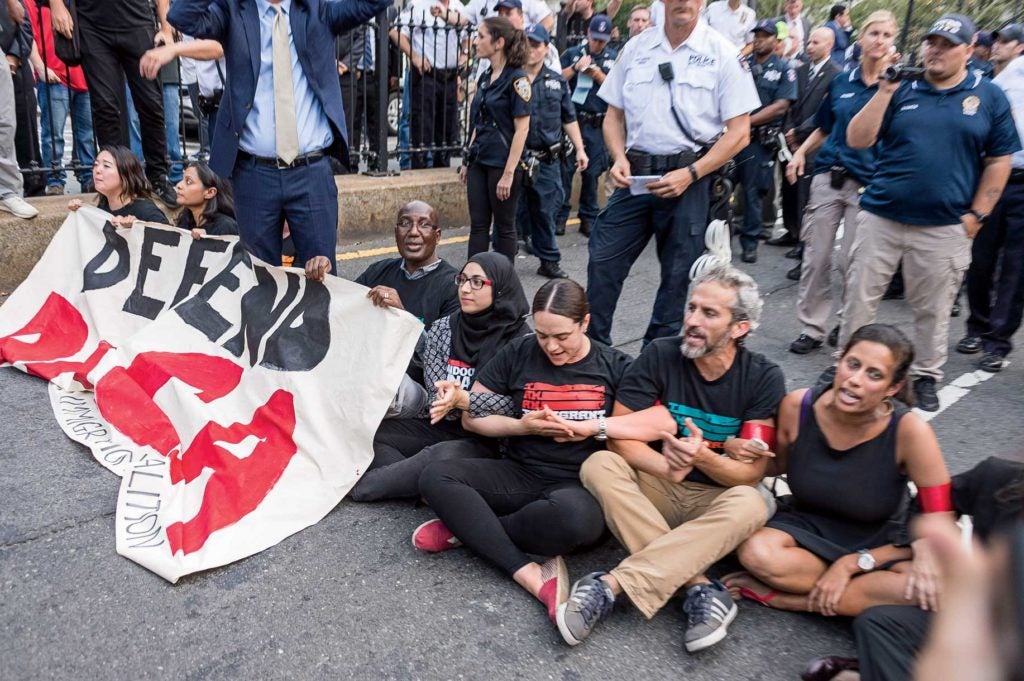 On this point Representative Bass of California concurs. “Trump is trying to pit us against each other,” she observes, adding that it’s critical that African-Americans show solidarity with immigrants, especially those who are Black. She points out that Trump’s pledge to end the immigration visa lottery, which he said “randomly hands out green cards” to the -undeserving, and so-called “chain migration,” whereby an -immigrant can sponsor an unlimited number of relatives, are really ploys to limit the numbers of Black immigrants. “The primary way that Blacks come here is through diversity visas and family reunification,” Bass says. So when Trump proposed giving DACA recipients legal status on the condition that we get rid of these programs, even the DACA kids objected. “They said, ‘No, we don’t want that, because you’re saying that I can stay but my aunt can’t come,’ ” explains Bass. Instead, she and others favor a “clean” DREAM Act that will provide a pathway to citizenship for some 2.1 million undocumented youngsters. “Immigrant youths should not be used as bargaining chips,” says Patrice Lawrence, the national policy and advocacy director for the UndocuBlack Network. Meanwhile, Denea Joseph anxiously awaits each new development in the political arena and each new ruling in the courts. Sharing her aspiration to one day become a human rights attorney and an American citizen, she explains, “My dream of citizenship fuels me to continue the fight for equity across the United States of America.” And so she keeps on advocating for all immigrants, including those from the diaspora like herself. After all, they don’t call them dreamers for nothing. Read the full story in the October issue of ESSENCE, on newsstands everywhere!