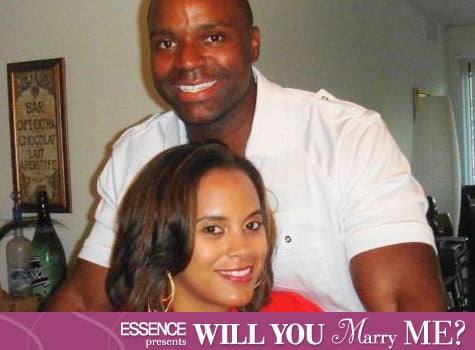 You’ve met the four couples of this year’s “Will You Marry Me?” competition. You’ve watched him propose, you’ve seen her accept. You’ve voted time and again (did you know you can cast a vote every 24 hours? did you know by simply voting you are eligible to win a four-night stay in Maui?) for your favorite, each click bringing that couple closer to winning a dream wedding. You’ve seen their photo galleries, you’ve read their weekly blogs, you’ve heard why you think they should win. Now, let’s get real: This is all about the ladies! Check out our interview with Maya Miller, fiancee of Cleveland Carr. ESSENCE.com: What was your first impression of your fiancee? MAYA MILLER: My first impression of Cleve in 8th grade I actually do not remember.  My first impression of Cleve was our first phone conversation.  After emailing each other, he finally called and he literally talked for about 20 mins. straight.  I could not get a word in.  I could hear the nervousness in his voice as he shared his life resume.  I thought he was kind of quarky and filed him in my friend box.  I guess it must have been something special in his words because we didn’t get off the phone entire night.  We just talked for hours and now we are getting married.   ESSENCE.com: How and when did you know he was the one? MILLER: I knew Cleve was the one after our first weekend together.  Everything just seemed right that weekend.  After 2 weeks of phone conversatfions I was nervous to finally see him in person and wondering if the same connection would still be there.  It was and I’ve been hooked ever since.  My children sealed the deal.  They connected immediately and their relationship has blossomed ever since.  Once I saw they were comfortable, I knew.  I even told my mother I knew I was going to marry him that same weekend.   ESSENCE.com: Was this the right moment in your life to make this commitment of getting engaged? MILLER: I’m not sure when the “right” moment is.  The right moment to be engaged for me was when our relationship felt natural.  I try to live my life paying close attention to my thoughts, emotions, and what God tells me.  My right moment was when all 3 of those things synced together without a second thought. ESSENCE.com: Were you actually surprised by the proposal? Or did you see it coming? MILLER: I was halfway surprised by the proposal.  I had a feeling something was stirring because my friends and family were acting different.  Cleve was acting outside of his character and we had discussed marriage before.  So, I knew it was coming soon.  The bigger surprise was HOW he proposed with ESSENCE.   ESSENCE.com: Were you impressed by the effort he went through to get you two into this year’s Will You Marry Me contest? Does that earn him bonus points? MILLER: Cleve gets all the bonus points and then some!  I’m not sure how he found out about the contest, but taking the time to enter us and having strength to believe and hope that he would be chosen is phenomenal.  I am completely impressed with Cleve’s initiative and that he thought so highly of me to want to make our proposal and the start of our marriage this exquisite.   ESSENCE.com: What does marriage mean to you? MILLER: Marriage means to me having that partner that you walk through life with.  Loving and respecting your partner enough to allow yourself to be vulnerable and say those things that are hard to say.  It means finding the time when there isn’t any.  It means loving unconditionally when you just don’t feel like it.  Marriage for me is desiring each other’s happiness, having the same moral foundation and working together.   ESSENCE.com: What do you think are the most important elements to a successful marriage? MILLER: Trust, honesty, respect, spirituality, good support system and great sex!!   ESSENCE.com: Describe the thoughts that ran through your head as he actually said the words, Will You Marry Me? MILLER: All of this for me!  I’m getting married, again.  And it feels so damn good!!!  Then I feel a light tap on my leg and it’s my son Kadin.  I bend down and he ask me, “mommy are you and sonny getting married?”  I replied yes looking directly into his eyes for his approval.  It felt like time was passing and passing and passing waiting for my son to tell me it’s ok, he’s happy too.  He immediately responded, “ok” and went back to playing with his new brother, Brandon.  Finally, it was ok to enjoy the moment. NOW VOTE!