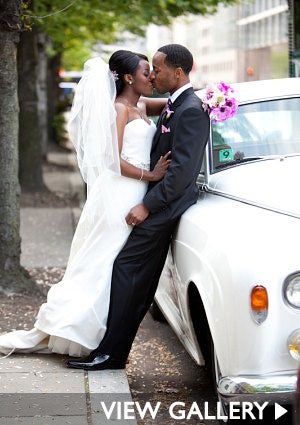 Bride: Virdina Milfort, 25 Groom: Kevin Gibbs, 32 Hometown: Washington, D.C. Occupations: Virdina — Howard University Law Student; Kevin — Information Systems Administrator Wedding Location: Decatur House, Washington D.C. Wedding Date: April 22, 2010 Love in this Club Virdina had just returned home to the Washington D.C. area, after graduation from Duke University. On the night that she met Kevin she and her two best friends went out to Jin on Avenue U to celebrate. Kevin, who hails from Brooklyn, took one look at Virdina and thought, “she’s not like the women from around here.” He stepped to her and asked, “Are you from New York?” She looked at him as if he was crazy and said, “No I’m not.” As the night progressed Kevin won Virdina over with a few dances and his laid back attitude. “He wasn’t super aggressive and I guess that had me intrigued,” Virdina admits. “I was talking to my friends but he was still on my mind.” Ask and You Shall Receive On their second date Virdina and Kevin went to the movies. Even though the film wasn’t memorable — “It was some movie that I would never see, ever,” Virdina says — the evening was not a total bust. It was the night these two shared their first smooch. “After the movie he goes, ‘So, are you going to kiss me now?'” Virdina laughs. “I was like, ‘OK, I guess that’s what we’re doing now.” By Your Side When Viridina met Kevin she was not looking for a serious relationship, as she had plans to live in Belgium for a year. “I was trying to just date and have fun for the next couple of months,” she says. As their romance grew, Kevin began talking about making plans to fly to Europe to see her and trying to make things work. “Seeing that he was willing to make the effort and the sacrifices, I realized how much harder it would have been to be without him,” she says. In The Beginning Kevin got Virdina’s two girlfriends that were out with her on the night they first met to help him with hi proposal. The ladies planned an evening of mofongo at a local Puerto Rican restaurant and dancing at Jin, the lounge where Virdina and Kevin first met. Once at the bar, Virdina heard a voice that she couldn’t recognize coming through the speakers. She was confused. “I was like, ‘Is someone getting proposed to?’ I started looking at every other person in the club thinking, ‘Is it that girl?’ I kept asking questions,” Virdina laughs. “Then Kevin came out from the back and then it all clicked. He was wearing the outfit he wore the night he met me. Then he got down on one knee and popped the question. I was really stunned.”