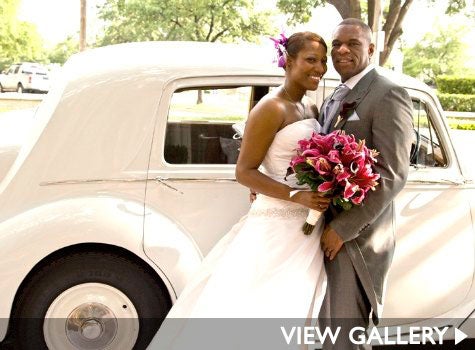 Bride: Venus Scaife, 31 Groom: Ikechukwu Okeke, or Ike, 39 Occupations: Venus — Pharmaceutical Sales Representative; Ike — Property Developer Wedding Location: Ceremony — First United Methodist Church of Fort Worth, Texas; Reception — the Fort Worth Club Wedding Date: May 22, 2010 What a Coincidence Venus met her sweetheart Ike while visiting her girls in London to ring-in the 2007 new year. The two randomly sparked up a conversation in a lounge — only to find out that they were connected — Ike’s cousin was Venus’ friend’s boyfriend. A few days later, someone knocked on Venus’ door. It was Ike. He remembered her address from the night that he and his cousin had dropped her off after the party. Pleasantly surprised by his random appearance, Venus invited him inside and the two talked for five hours. When he left, Venus said, “It would be really nice to experience fine dining in London with a Londoner.” Consider It Done “It was the best date I’ve ever been on,” Venus says of the night Ike took her out to dinner in a rooftop garden and a personal nighttime tour of London’s more off-the-beaten-path sights. When he dropped her off it was 12:30 in the morning. Her flight back to New York was leaving at 8:30 a.m. She left him with a kiss and her e-mail address and “no expectations.” Love Will Travel Ike wouldn’t let Venus go so easily. He had a trip planned to Chicago and made some adjustments so that he could spend a few days in New York City with the woman who stole his heart. “We had the best time,” Venus remembers. “We met up for lunch and dinner the whole time he was here.” A week after he left, Venus won a vacation to Mexico in May for herself and a guest. “I called my mom and said, ‘I’m about to invite this guy to Mexico with me,” Venus told us. “She said, ‘You have to follow your heart.” On May 17, 2007, under the warm South of the Border sun, Venus realized she was in love with Ike. “I was watching him interact with the people around us and I just realized that I could spend the rest of my life with this guy,” she gushes. Birthday Surprise For Venus’ thirtieth birthday, Ike and her sister surprised her with a party. Once at the soiree, Ike pulled the guest of honor off to the side to take a picture. He told her to turn around and strike a pose, giving him just enough time to pull out an engagement ring and slip it between his lips. When she turned around to give him a kiss she was surprised for the second time that night. “I love you and I want to spend the rest of my life with you,” Ike said. “Will you marry me?” He didn’t even have to ask. After years of long-distance romance, Ike moved to New York and he and Venus tied the knot in a gorgeous stateside affair in Fort Worth, Texas. Share their love.