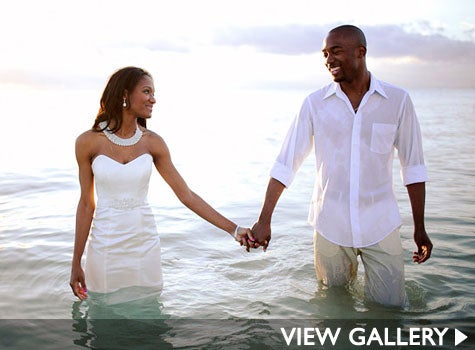 She’s All That
When Darwin first saw Shalon at a church convention in Virginia Beach during Labor Day weekend, 2006 his first impression was, “She’s really pretty, but she probably thinks she’s too hot.”

When the two ended up grabbing a bite with a group of friends later, Darwin quickly learned that Shalon “appeared to have a good head on her shoulders, too.”

He decided he had to stay in contact with her.

Disappearing Act
The two exchanged info and went their separate ways — Shalon lived in Philadelphia and Darwin lived in upstate New York. They talked on the phone every day for three months straight and then Darwin just stopped calling.

With another church convention coming up, Darwin knew he had to apologize to Shalon for acting the way he acted.

“He just opened the flood gates,” Shalon remembers. “He said he was sorry and he just went through a phase where he knew I was the one when he met me, but he wasn’t ready for a relationship.”

“That night we talked on the phone for an hour,” Darwin continues. “It was just like a breath or fresh air. I was reminded of why I fell for her in the first place.”

The two decided that their romance was worth a second shot and never looked back.

With Darwin in New York and Shalon in Philly, the couple maintained their long distance relationship with lots of phone conversations and instant messenger sessions. One morning, as she was getting ready for her day, Shalon received an IM from Darwin that read, “I think I’m falling in love with you.”

And they both dove in…

Tonight is the Night
When Darwin drove down to Philly to go shopping with Shalon and her mom in March 2010, he had no plans of buying an engagement ring. He simply wanted to consult a jeweler in the city to bring their specs back to his guy in New York. When the jeweler offered him a price and quality that he could not refuse he said, “I’ll take it!”

“I started shaking,” Darwin tells us. “I was thinking ‘I didn’t come here to buy a ring.’ It was a lot of pressure.”

Darwin had the ring by the end of the day.

Unable to hold onto his little secret for very long, he decided to pop the question that night.

The couple made reservations at a steakhouse in town and got a corner table.

“We got to the restaurant and halfway through the meal I noticed this bulge in his pocket,” Shalon remembers. “I was thinking, ‘I know he’s not that silly to have the ring in his pocket. He knows that I’m Inspector Gadget.'”

Sometime during their meal, Darwin pulled the box out of his pocket and placed it on the table. “There better not be earrings in there,” Shalon laughed.

As soon as Darwin opened the box, Shalon’s giggles turned to sobs.

“I was a mess. I was boo-hooing, wiping my nose and I couldn’t even see,” she said.

Shalon and Darwin dipped down to Riviera Maya, Mexico to say their vows in front of 70 of their closest friends and family. Share their love…