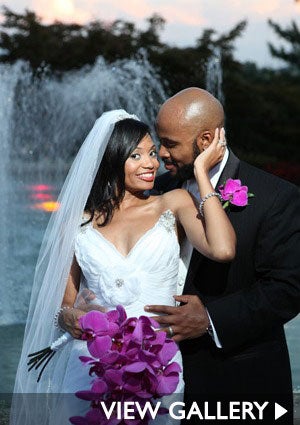 Bride: Russella Davis, 29 Groom: Richard Rogers, 27 Occupations: Russella — Johns Hopkins Graduate Government Program student; Richie — IRS Revenue Agent Hometown: Detroit, Michigan Wedding Location: Crescent Bend House and Garden, Knoxville, Tennessee Wedding Date: August 20, 2010 High School Crushes Russella Davis was a junior at Finney High School when Freshman Richie Rogers started to give her the eye. She liked him, but she wasn’t about to get with an underclassman. “We both had crushes on each other,” Russella admits. “I did not want to like him because he was younger than me.” It didn’t take long for him to win her over, though. “I couldn’t help it, he’s kind of cute,” She giggles. “I thought it was too good to be true. Here I am this freshman walking around with this girl that everybody wanted and here she is paying attention to me,” Richie gushes. Richie and Russella had kissed a few times. On January 12, 1998 the teens were chatting on the phone until past midnight. Tired of playing the guessing game, Russella laid it on the line for Riche: “Are you going to ask me to go out with you or what?” she asked. “I don’t just kiss people.” Richie asked, and the two have been going steady ever since. Through the Wire “We stayed together through everything,” Russella says proudly. In 1999, she left Michigan to go to Howard University. Two years later Richie headed to South Carolina State. “I really think us being able to go to different schools allowed us to establish our own personalities.” “When she left for school I thought we were going to break up,” Richie says. “I started crying like a little baby. I knew that I wanted to make it work so we started to come up with some things to get us over the hard times. We promised each other in college that we would talk to each other every night and say our pledge.” Richie and Russella created a motto that they would repeat every evening before they said goodnight on the phone. “Together Richie and Russella can get through anything because of their love for each other, their respect for one another and their trust in God.” Island Time: After school Russella and Richie moved back to Michigan. At the end of December 2009, Richie surprised his lady with a trip to Freeport, Bahamas. It was their first big trip together after college and Russella was just excited to beat the cold and lay in the sun with her sweetheart. While on the island, during a big New Year’s Eve celebration, Richie popped the question. “Right at the stroke of midnight, they threw on Michael Jackson’s “Pretty Young Thing.” She was dancing and I got down on one knee,” Richie describes. “She turned around and realized that I wasn’t dancing anymore. She laughed and giggled. I’m thinking, ‘Okay, you know why I’m down here. Then she said, ‘yes.’ At that moment the fireworks started going off. It was really nice.” “That’s the only time in my life when I experienced complete blindness and deafness,” Russella laughs. “I started laughing and clapping but I did not hear him say, ‘Will you marry me?’ It was such an amazing moment.” On August 20, 2010, Russella and Richie tied the knot in a beautiful courtyard wedding in Knoxville, Tennessee.
Loading the player...